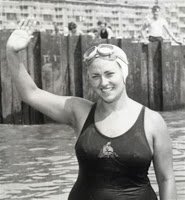 The ‘Women & Water’ Award was given to Montserrat for being such a pioneer in the sport of open water swimming in Spain where her career has lasted decades, first as an outstanding swimmer and then as a coach, administrator and inspiring leader.

Translated as “Swimming the Strait, Its Origin and History”, the book adds to any open water swimming collection.

The 287-page hard cover book is filled with hundreds of great photographs of swimmers in the Strait of Gibraltar with explanations of their personal histories and triumphs.

Montserrat comprehensively outlines the history of swimming in the Strait of Gibraltar (مضيق جبل طارق in Arabic or Estrecho de Gibraltar in Spanish) that separates Spain from Morocco, Arica. Many of the stories and photographs are publicly disclosed for the first time.

In 1969, she swam from Minorca to Majorca in Spain in 21 hours and 10 minutes and across Lough Neagh in 16 hours and 13 minutes. She also swam from Santa Fe to Corronda in Argentina and from Concordia in Argentina to Columbus, Uruguay. She serves on the Board of the Channel Swimming Association and acts as an official observer on many attempts to swim the English Channel and the Strait of Gibraltar.

Whether or not you read Spanish, Nadando El Estrecho, Sus Orígenes Y Su Historia is a great book for all open water swimming enthusiasts, especially historians of the sport.

And Montserrat is a great part of the history of the sport. Congratulations to her for her well-deserved award.