The First To France And California 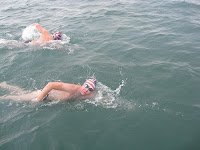 On June 29th, Team Outrageous, a four-person relay, was the first to France during the 2010 season.

The team, consisting of Jim McGuire, Patrick Reedman, Janina Dowding and Mike Russell, faced some fairly cold water. The water started at 13°C and dropped down to 11°C (51°F) by the time the foursome was within eyesight of France.

Jim recalled, “On my leg, I kept going afraid I was going to freeze if I stop. I could not be happier to get back on board. I had a shiver and got my clothes on fast. On Mike’s swim, we saw a large pod of dolphins behind us getting closer, so that was a good sign.”

12 hours and 39 minutes from start to finish, Team Outrageous was the first to France during 2010. Their course was constantly tracked – every 60 seconds – on InstaMapper which has a free app for the Apple iPhone. Jim plugged his iPhone to a charger and let it run for the entire route across the English Channel as it updated his course every 60 seconds. 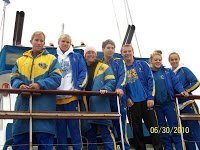 That same evening on the other side of the world, Tanner Cridland, Kellie Fecarotta, Natalie Malicki, Danny Miller, Sasha Westberg, and Derek Young of the Mission Viejo Nadadores finished the first Catalina Channel relay this season in 8:09:12.

“While we were waiting for the swim to start, we were entertained by a small seal jumping after flying fish. When Derek, the first swimmer, left the island, he had dolphins all around him. They came within inches of the bow of the kayak and jumped in two’s and three’s. Oddly, the dolphins returned on Derek’s second round too.”

“Although the second swimmer, Sasha, swam a calm, uneventful leg, Kellie and Natalie suffered with jellyfish stings. Danny swam with a broken hand and a cast. When things got a little bumpy on his leg. He asked “How long?” when he had only been swimming 26 minutes and said his arm hurt. He said he didn’t think he had it in him and he was cold. He kept swimming for a bit and looked up and asked, “Would it be illegal if I got out?” I said “If you get out, the relay is over…” He groaned and put his head down and swam even harder.”

“I love being a part of these efforts,” said Lynn. “The energy is so uplifting.”

Two great swims in what promises to be hundreds of more successes in the English and Catalina Channels this season.