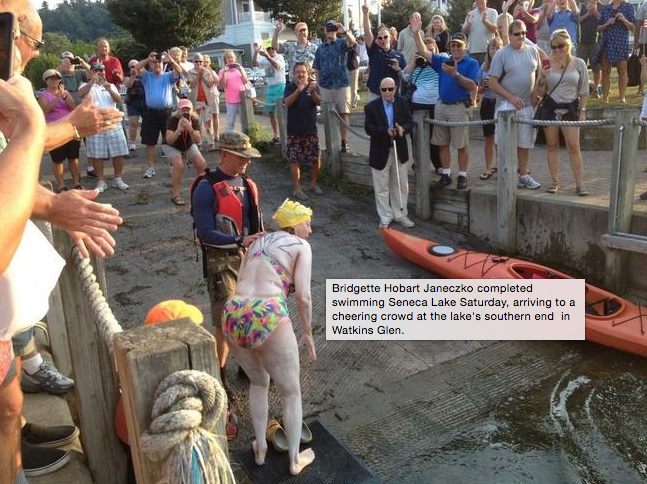 With her escort boat piloted with Betty Billings and Belinda Stayton, and her crew anchored by her kayaking husband Bobby Janesczko, Bridgette Hobart Janesczko set off across the at Seneca State Park at 6:01 pm.

24 hours 31 minutes and 38 miles later, she walked up onshore at Village Marina in Watkins Glen.

With her final stroke, Hobart became the first person to complete a swim across all five of The Majors, the largest lakes of the New York Finger Lakes.

Going five for five, Hobart’s final report card on The 5 Majors & The 4 Minors Swimming for a Cause event is as follows:

The 52-year-old recalls her latest swim that placed her in the exclusive 24-hour Club for the 60.9 km swim. “We started Friday around 6 pm and looked forward to the forecasted calm night with mostly clear skies so we could enjoy the beautiful sunset and the full moon. The first 6 hours delivered that, and then all hell broke loose.

Headwinds hit us for approximately the next 10 hours delivering 2-3 foot chop, pushing me backwards on feeds and slowing my progress significantly when swimming. We still had our lovely full moon though, which was awesome.

The wind chill was tough at night so I knew I just had to keep swimming and feed the best I could. I felt beat up and my shoulders were hurting. I continued to alter my stroke the best I could based on body feedback in hopes of avoiding injury and ending my swim on my final lake in The Majors.”

Her husband reported similarly. “What we had originally expected to be an 18- or 19-hour effort turned into a 24 and a half hour ordeal due to some really brutal conditions overnight. She fought a nasty headwind and significant chop for nearly twelve hours Friday night. But she powered through and got to Watkins Glen.”

Hobart is a 1984 graduate of Nazareth College and one the school board of trustees. She is swimming the Finger Lakes to help promote the opening of the the Nazareth College Wellness and Rehabilitation Institute that open in September. Her swims have been like a magnet, connecting students, alumni and many throughout the local populations of the Finger Lakes.

‘I was blessed with great crew, support boats, kayak escorts and support swimmers. I felt safe in the conditions and we just plugged along hoping for a break eventually. It wasn’t great news when I thought we were at a point where it was few miles to completion and was told more like 12. I just focused on staying positive feed by feed. I felt we were forever at 10-12 miles left.

Around 11 am the winds settled and we started to make progress. The better weather brought out so much shore and boat supporters which really energized me.

The last few hours were grueling. In the final hour my Naz buddy Kama Way came to join us and jumped in as a support swimmer. I then just focused on how cool it was to finish such a swim with a Naz buddy, and that we did.”

Hobart was greeted many supporters who seem to be growing in numbers as she continues her 9 stage swim event in the New York Finger Lakes. “We approached Village Marina in Watkins Glen. The sounds of cheers and horns really helps push me the final distance to land on shore.

It was a long afternoon, but a rewarding one when we finished at approximately 6:30 pm on Saturday night. We planned on celebrating with BBQ in Watkins Glen on Saturday night. However, I found myself flat on my back enjoying bed spins instead. Sunday was a bit better and by Monday I finally felt normal again.”