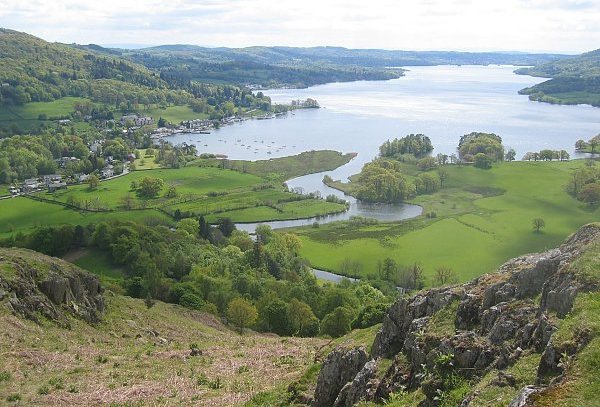 Courtesy of WOWSA, Huntington Beach, California. Sam Plum, Jason Betley, Helen Gibbs, Helen Liddle, and Debbie Taylor set off on an unprecedented swim on July 3rd and 4th 2015. The 5-person 40-mile (64 km) Three Lakes Challenge (or Loch, Lake, Llyn) involved swimming the length of Loch Awe in Scotland (25 miles/40 km), then driving to the Lake District to swim the length of Windermere (10.5 miles/16.9 km), and then driving to Wales to swim the length of Llyn Tegid (4 miles, 6 km). They wanted to complete the aquatic equivalent of the National Three Peaks Challenge. “We aimed to do it in under 48 hours including travel. The total distance for all three lakes is just under 40 miles,” explains Plum. “On the 3rd of July, we started in Loch Awe in Bonny, Scotland. It is the longest freshwater loch in Scotland, measuring 41 kilometres (25 miles) from end to end. Loch Awe is not the deepest or the largest surface area of Scotland’s lochs, nor does it contain the most water, but it is the longest, beating Lochs Lomond and Ness. We then drove to Lake Windermere and swam 16.9 km. Finally, the third lake was Llyn Tegid in Wales, or Bala as its better known. It is 4 miles (6.4 km) long for the Three Lakes Challenge or Loch, Lake, Llyn.” Liddle described the swim. “The swim was swum as per Channel Rules – one standard swimsuit, goggles and hat on 1-hour rotations except for in Bala where we did half-hour rotations. The order was kept the same throughout. So if the last swimmer finished their leg of a lake in 50 minutes say, then the same swimmer started the next lake and finished the hour before the next swimmer got in. The aim was to complete in under 48 hours this included all the driving as well.” Plum explained the logistics and crossings. “The total swim time was 19 hours 24 minutes including an 11 hour 48 minute crossing of Loch Awe, a 5 hour 53 minute crossing of Windermere, and a 1 hour 43 minute crossing of Llyn Tegid (Bala). The total time including travel was 36 hours 23 minutes.” Copyright © 2008 – 2017 by World Open Water Swimming Association