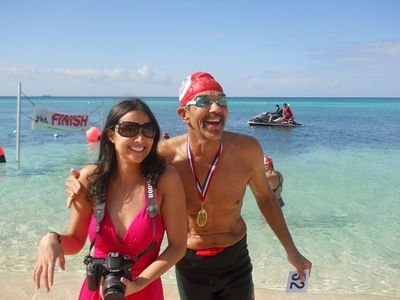 The Flowers Sea Swim in the Cayman Islands has always strived to set the bar in the global open water swimming world.

Its gorgeous setting on Seven Mile Beach on Grand Cayman is augmented by the hospitality of its hosts, the availability of over $100,000 in random prizes, and the joyous camaraderie of the 800+ swimmers who come from all around the world.

But Frank Flowers and his daughter Dara are really stepping it up and expanding their scope for the 2013 event.

The Flowers team will also host 5 km and 10 km swims on the Monday after the Flowers Sea Swim on June 17th. There may not be a more clear, calmer, tropical, safer 10 km swim in the planet. Swimmers like Penny Palfrey, Barbara Held, Luane Rowe, and Lexie Kelly will participate and everyone is eligible for winning random prizes (1-in-5 odds) that includes BlackBerries, iPads, hotel stays, and dozens of airline tickets to Miami, New York, Panama, Rome, Los Angeles, Las Vegas, Chicago, London, Dublin, Rio De Janerio, and Toronto.