Flying Into A Happy New Year 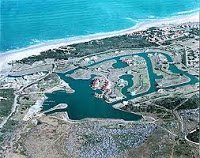 Brenton Williams celebrated the New Year with a well-deserved rest.

On December 31st, he set a South African record for the longest open water butterfly swim. “I was trying to push the boundaries of what is possible doing fly,” said the Jeffreys Bay maverick of his 6 hour 20 minute 17 km fly in Marina Martinique.

Back in 1994, Chris Barnard set the previous standard with a 15 km butterfly swim. Williams upped that record to 17 km effort.

2012 was quite a year for the extreme butterflyer from Jeffreys Bay who, together with five teammates, started his aquatic rampage with a new world record for a continuous open water relay swim of 350 km over 5 days in March in Marina Martinique.

Williams also set a record when he became the first person to swim butterfly between 3 Anchor Bay and Robben Island, a distance of 11.5 km in 12ºC (53ºF) water. He was also nominated for the World Open Water Swimming Performance of the Year for a tough 8 km butterfly swim at St Helena Bay on the west coast of South Africa in October.

“The South African record of 17 km was a very difficult swim. The last 5 km was a grind as my shoulders felt that they were seizing up and there was a problem with my right knee. The water was warm at 24.8ºC (76ºF). It felt like I was overheating at one stage. The past 6 months my training has been focused on cold water for the Robben Island swim so it was an adaption to try handle warmer water. I wanted to do a big swim in Jeffreys Bay as this is where I live and train. The support of my friends at the Marina really made a difference as it helped me to dig deep and swim through the pain. The support over the last 2 km was fantastic and will stay with me forever.”