Former Coaching Colleagues Together On The Olympic Feeding Station 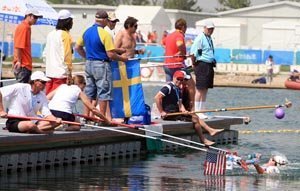 Rick Walker of Southern Illinois University and Catherine Vogt had once before been fellow coaches on the USA Swimming National Open Water Swimming Team. How times have changed and opportunities have risen. At the 2012 London Olympics, Walker will be the head coach for the Egyptian Olympic swimming team while Vogt is coaching two swimmers – one representing Tunisia and one from the United States in the Olympic 10K Marathon Swim. “For me, this has been a lifelong dream,” said Walker who will coach Mazen Aziz in London. “I had vowed that I would help others to achieve their Olympic goal and the fact that I’m getting to go as a coach is that much more gratifying.  I have been Mazen’s coach and for us it’s been a long journey.  It’s a dream of his that he has fulfilled and now it’s just going there to make sure we make the best of the trip.” Walker and Vogt may have dreamed of wearing America’s red, white and blue at an Olympic Games, but going to London as coaches is also extremely satisfying.  At Southern Illinois University, Walker also coaches Pamela Benitez of El Salvador and Csaba Gercsak of Hungary who will also represent their countries at the London Games.  Gercsak will also swim the 10 km marathon swim, as is Alex Meyer of the USA who Walker has also coached on the American national team early in his career. With direct knowledge of 3 swimmers from 3 countries in the Olympic final, Walker’s ties to 12% of the finalists puts him in a unique position among his fellow coaches.  “The fact that I’m going to get a chance to watch my swimmers there and to experience the whole thing with them makes it very exciting.” Early in Vogt’s career, she had coached America’s Chip Peterson to a world championship in the 10 km marathon swim and was the first woman to head an American national team.  Now she’ll be lining up on the feeding station to assist Ous Mellouli of Tunisia, one of the gold medal favorites.  “Ous is such a hard worker and we’ve been bringing him along [for the 10K].  He learned a lot in Cancun [at his first international 10K race] and really put a great race plan together in Portugal [at the Olympic qualifier].” But watching the talented Mellouli sprint day in and day out opened her eyes to other opportunities.  “Ous has a chance to swim the 200m, 400m, 1500m and 10K.  But the competition is so tough [in every event].  We’ll see what he’ll focus on.” It will be interesting to see these former colleagues lining up together on the marathon swimming feeding pontoon.  They deserve the honor and worked hard for the opportunity. Copyright © 2008 – 2021 by World Open Water Swimming Association