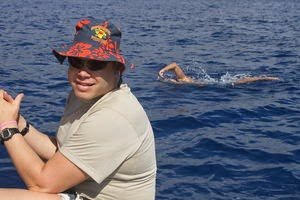 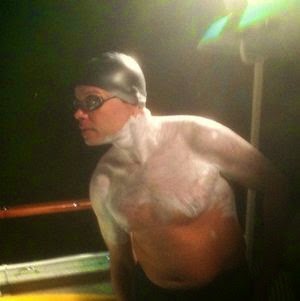 Forrest Nelson does his swims quietly and under the cloak of darkness.

But when he does his swims, it is always a major effort.

Similar to his Mexican counterpart Antonio Argüelles Díaz-González, Nelson is a Renaissance Man in the marathon swimming world.

Newly voted in the International Marathon Swimming Hall of Fame as an Honour Swimmer, the MIT graduate is a member of the 24-hour Club, president of the Catalina Channel Swimming Federation.

He possesses the smarts and experience to intelligently analyze a swim before, during and after at a level rarely seen in the open water swimming world.

He has swam the Kaulakahi Channel (Kauai to Niihau in Hawaii), the Palilolo Channel (Maui to Molokai in Hawaii), the Tsugaru Channel (Honshu to Hokkaido in Japan), the Cook Strait in New Zealand, Tampa Bay Marathon Swim in Florida, and the Anacapa Channel in California.

He was also a member of the 52-mile 25 hour 48 minute HTC Relay from San Clemente Island to the Southern California mainland, and the unprecedented 6-way Catalina Channel crossing in 61 hours 7 minutes with Team FTD.

Nelson also frequently volunteers as an escort crew member and Observer on a number of solo swims and relays from the Catalina Channel to the Santa Barbara Channel and the Hawaiian Islands. When he is serving in those capacities, he never sleeps or rests no matter how long or rough the swim is. His eyes are always on the swimmer while he frequently consults with the pilot in order to help navigate the optimal course for his athletes.

Whether in the water or onshore, whether he is in the office or on a boat deck, Nelson received a well-deserved honor.