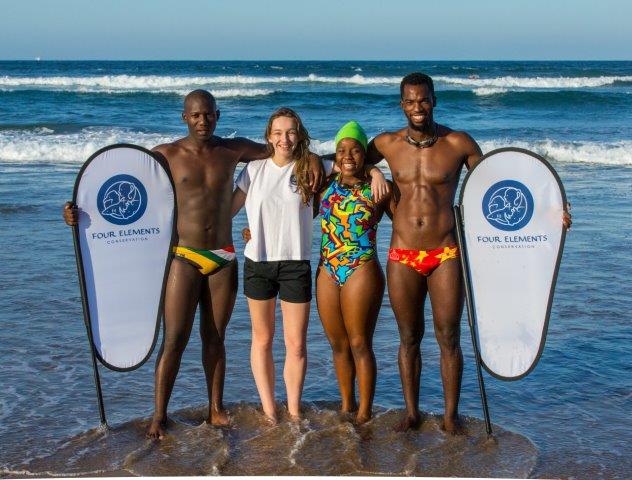 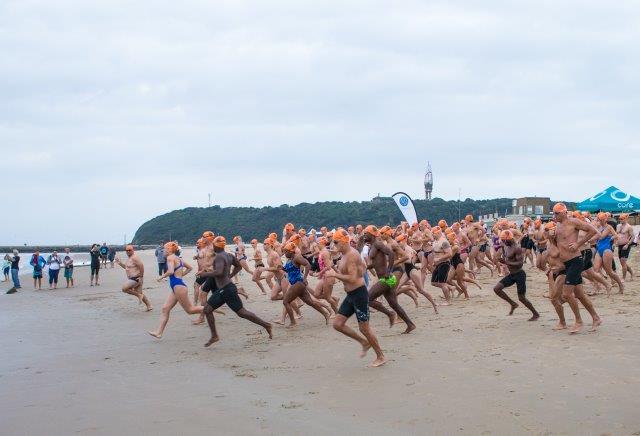 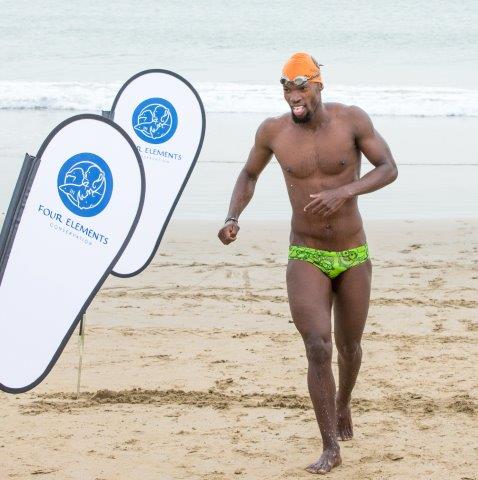 Start of race above and Thando Thusi finishing on left, photos courtesy of Graham @Topfoto.

The 3rd Four Elements Ocean Challenge will be held on June 11th in Durban, South Africa in an effort to create awareness about the plight of the oceans.

The swim has grown from 16 participants to 90 swimmers this year with 60 spots still available.

Established four years ago by Durban’s Olivia Taylor when she was just 14 years old, Four Elements Conservation NPC is an internationally-recognised organisation which aims to preserve the natural environment. The Ocean Challenge, which is one of the projects that falls under this banner, also serves to raise funds and awareness about the Four Elements Environmental Scholarship whereby 8 environmentally-minded youth are selected for an enlightening camp held at the beginning of the year.

“The first camp, which was held over four days at Bayete Zulu and Sodwana Bay in northern KwaZulu-Natal this year, was hugely successful,” said Taylor. “During the camp, the participants were taught how to convert their passion for conservation into real change by developing skills in marketing, fundraising and social media management.”

Taylor said, “The ocean really is the lifeblood of our planet, yet there is not enough awareness about what is actually taking place under the waves. We are seeing the effects of years of pollution through the decimation of marine life, and now is the only time we have to make a difference.”

Entrance for the Ocean Challenge is a minimum required donation of R350, all of which will go towards funding this informative camp for the youngsters, converting them into capable social entrepreneurs. Applications for the camp are still to be finalised, but will be open to the public at the end of July.

Those wishing to support the challenge, but would prefer to remain land-based, there will be an informal walk taking place alongside the swim.

The swim will start at 7 am at Laguna Beach, Durban and extend 6 km to the Harbour Wall. For more information, visit www.fourelementsconservation.org.