Fourth Time Is A Charm For Anne Marie Ward 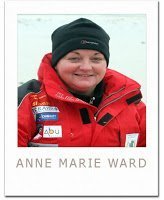 A day after Stephen Redmond‘s success, Anne Marie Ward joined the elite crowd of North Channel swimmers with an 18 hour 59 minute effort, courageously swimming through the night and ending in darkness at 3:35 am.

It was Anne Marie’s fourth attempt – and second since August this year – which makes her first success all the more sweet.

After reaching the pinnacle of sport with successful swims in the English Channel and North Channel, Anne Marie talks of her start in the sport.

“My twenties and early thirties were spent focusing on my education and career. I work as a Disability Services Manager with the HSE and although I love my job I realised about five years ago that I didn’t have a very healthy work life balance and that my own health was suffering as a result. I decided it was time to get my act together and do a bit of exercise, of course swimming was the natural choice. To help my motivation I took on a 2-mile charity sea swim in South Donegal, which I easily completed and as I had trained for it I felt great, there was also a feel-good factor in raising money for the charity.”

The entire community feels good for Anne Marie, including Kevin Murphy, the King of the Channel.

To date, the North Channel successful solo swimmers include: