A Fragile Earth Signed By A Fearless Leader 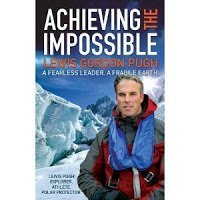 A Fragile Earth Signed By A Fearless Leader

Courtesy of WOWSA, Mount Everest. Lewis Pugh is heading down Mount Everest and will be back at sea level for a book signing on June 1st in London.

After his recent glacial lake swim at 5,300 meters, Pugh will sign copies of his autobiography, Achieving The Impossible: A Fearless Leader. A Fragile Earth at the Speedo Global store in London.

Pugh said, “It’s one of the hardest swims I’ve ever undertaken. When I swam in Antarctica and across the North Pole I swam with speed and aggression but on Mount Everest you can’t use the same tactics. Because of the altitude you need to swim very slowly and deliberately. Swimming 20 meters at full speed in the test swim, I felt I was going to drown. I was gasping for air and if I had swum any faster I would have gone under. I was deeply concerned that I wouldn’t make 1K and I’m delighted that I’ve finally achieved it.”

Driving down to the shoreline was not an option in this case. “Getting to the lake was an ordeal. We have been trekking for two weeks to get to our base camp at Gorak Shep (Place of the Ravens). From there to the glacial lake it was a lengthy scramble over rocks and boulders.”

While his swim was dramatic, Lewis’ goal of drawing attention to climate change. “All along the Khumbu Glacier I’ve seen pools of melted ice. Millions of people rely on this water and preserving this water supply is vital to peace in the region. That is why I was so determined to draw attention to this critical issue by undertaking a ‘Swim for Peace’ under the summit of Mount Everest.”

The documentary footage that Pugh and his team took will be powerful for the rest of us at sea level to watch. In addition to his swim at 5300-meter altitude, Pugh also completed an unprecedented swim at 5010-meter altitude across Lake Imja en route to Mount Everest. What is amazing about this swim is that Lake Imja did not exist until 1958. The lake is now over 2 km long due to the melting of the Imja Glacier.