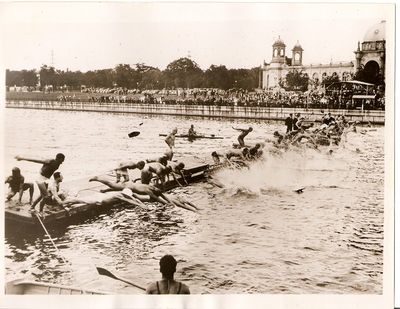 60 of the world’s greatest distance and sprint swimmers raced in the 15.5°C (60°F) waters of Lake Ontario at the 9th annual World’s Champion Swim Marathon held at the Canadian National Exhibition in Toronto, Canada on September 1st 1936.

Francis ‘Frank] Pritchard, an Honour Swimmer inducted in the International Marathon Swimming Hall of Fame in 2009, crossed the finish line as the world champion, creating a new record for the 5-mile course in 2 hours 7 minutes.

The Buffalo, New York native was active in marathon swimming from 1927 through 1938.

During his early career, Pritchard finished second in the 1927 National A.A.U. 4.5-mile championships and fourth in the 1928 USA Olympic Trials in the 1500-meter freestyle.