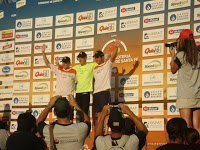 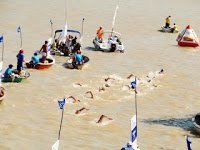 Like the FINA World Cup race in Brazil, the top men at the FINA Open Water Swimming Grand Prix had a furious fight to the finish at the end of their 8-hour 57K race from Santa Fe to Coronda in Argentina.

In a mind-boggling display of flat-out speed at the end of an endurance race that sapped everything out of the combatants, Joanes Hedel of France outlasted and out-sprinted two swimmers from Argentina Luciano Sales Rubio and Damián Blaum to win.

The conditions and race took everything out of everyone. “I was 10 seconds behind Hedel after 8 hours 36 minutes. I made my move with 5K to go, but I should of waited until 2K,” said Trent Grimsey. “I’m in a world of pain.”