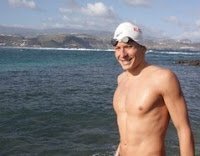 Francisco José Kiko Hervás of Spain isn’t tall or physically large, but he has a huge heart.

The man can flat-out swim fast in the open water.

The multi-time national Spanish champion has an outside shot at a medal this time around in London. He is literally living his dream, “I have one tattoo on my arm. It is for my first Olympics in Beijing. From when I was a child, I always dreamed of swimming in the Olympics.”

And now he is doing it again in London after his Olympic debut in Beijing when he finished 13th in the 10 km marathon swim. But Kiko has been lurking around the top 10 throughout this quadrennial and is itching for a top 5 or podium finish.

After the Spanish national championships in Barcelona in June, I focused only on the Olympics doing between 80 – 100 km [total] per week
.”

Besides his high-altitude training and long training sessions in the pool, Kiko also takes advantage of his native Spain. “Normally I train in the swimming pool, but from June the weather in Spain is good and I do one or two workouts per week in the sea or in the Olympic channel in Barcelona.”

He is leaving no stone unturned in his preparation. “During July I am training in Pontevedra in the north of Spain where the water temperature in the sea is similar to Serpentine Lake (20ºC).”