Frank Shorter And Julie Moss Come To The Open Water 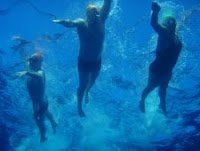 In 1972, American marathon runner Frank Shorter won the 1972 Munich Olympics marathon run. The Yale graduate’s victory was splashed on television, sparking a tremendous interest in running in the 1970s.

In 1982, Julie Moss dramatically lost the Ironman triathlon in Hawaii after severely dehydrated. Her agonizing stagger and crawling towards the end of the Ironman course was broadcast around the world.

Both Frank and Julie provided inspiration to millions of athletes around the world to compete in endurance events and take themselves willingly out of their comfort zones.

By 2012, 40 years after the Running Boom and 30 years after the Julie Moss Effect, a different era and a different chain of events in the open water swimming world has been the catalyst for the sport’s expansive global growth. But television will continue to take part in the diffusion of information of the sport.

When people see or hear something nearly impossible to do, it sparks something inside them. Some instinctively want to try it for themselves whether it is a swim in an ocean river, lake or sea. From the Dart 10K in England to the Del Valle Open Water Festival 10K in California, people are itching to take part in longer and longer swims.

The Olympic 10K Marathon Swim in London on August 9th (women) and 10th (men) will be a transformative event like Frank Shorter’s run in 1972 or Julie Moss’ finish in 1982. The races will be televised, streamed, tweeted, texted, photographed and videotaped around the world. The sport of open water swimming over the next Olympic quadrennial will be like nothing else the sport has seen or imagined.

Upper photo from the Olympic 10K Marathon Swim in London by Getty Images. Lower photo is from a SwimTrek camp in Gozo.