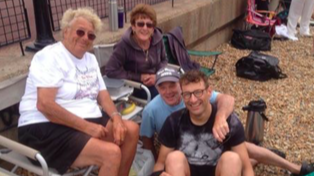 Walk around Dover and the name of Freda Streeter is a name spoken by channel swimmers with highest reverence and respect.

As the long-time icon of The Dover Beach Crew* and the mother of the most prolific English Channel swimmer in history (her daughter Alison Streeter, MBE), she has voluntarily given decades of advice, guidance, inspiration and mentorship to thousands.

Unequivocally, the guidance from the International Marathon Swimming Hall of Fame inductee is exactly what the channel swimmers needed and what helped them swim between England and France.

The 78-year-old Channel General, as she is known in Dover and worldwide, was recognized as a Member of the Most Excellent Order of the British Empire and received her MBE in a recent announcement by the British government for her service to open water swimming.

The Most Excellent Order of the British Empire is a British order of chivalry that rewarding significant contributions to society – an honor richly deserved by Streeter, a priceless treasure of the global open water swimming community.

* The Dover Beach Crew includes Freda Streeter, Irene Wakeham, Barrie Wakeham and other volunteers who regularly run training sessions in Dover harbour for swimmers who challenge themselves to solo and relay crossings of the English Channel swimmers as well as other open water swimmers.

Upper photo of Streeter with Barry and Irene Wakeham courtesy of Vasanti Niemz.