The Freedom Of The Open Water 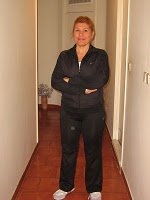 From Seattle to Sydney, Fukuoka to Fort Lauderdale, Rio to Rome, Miami to Melbourne, Cape Town to Chicago, people have the freedom to explore, enjoy and experience the open water. From seas and lakes to bays and rivers, the allure of the open water is an occasional challenge to some and a daily fitness fix for others.

The New York Times, however, reports on a group of individuals where such freedom does not exist.

The article reminds us of Taraneh Hashemi, a swimming coach in Tehran, Iran with a very simple open water swimming goal: “I would like to set a record by being the first female Iranian to swim more than 3000 meters in the open water.

I believe I can swim much longer, almost up to 6K and I am ready if the opportunity is available. When I was a child, I used to swim for fun. As I got older, I wanted to be a better swimmer, but I waited until my children grew. I still continued swimming and have been a swimming coach for 17 years. I have not had the opportunity to compete internationally. I am happy to travel anywhere to swim.”

Whether it is simply getting in the open water or swimming 6K, Mrs. Hashemi’s wishes are certainly a feeling that millions of females around the world can easily understand.