Friends And Supporters Of 21 Yaks And A Speedo 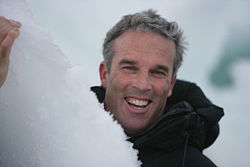 Lewis Pugh‘s new book 21 Yaks and a Speedo will soon be released.

For an open water swimmer who will be formally inducted in the International Marathon Swimming Hall of Fame at the 2013 Global Open Water Swimming Conference in Cork, Ireland this coming October, this international network of friends and supporters is quite impressive.