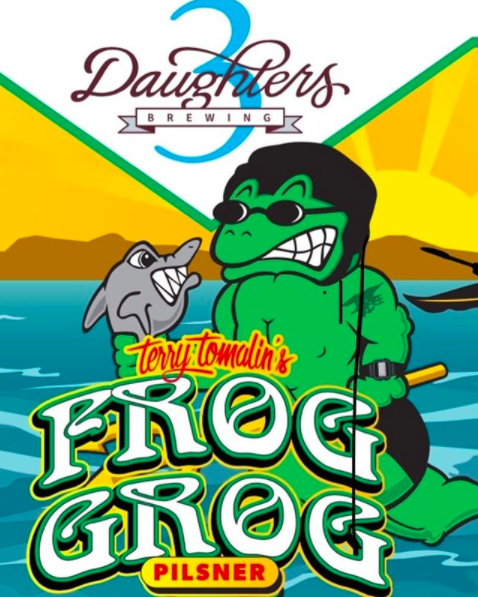 After his English Channel crossing, Roger Finch, a Triple Crown swimmer from South Africa was famous for asking for a beer [see below].

After this Sunday’s 5 km Tampa Bay Frogman Swim, the swimmers can do the same with Terry Tomalin’s Frog Grog Pilsner, produced locally by 3 Daughters Brewing.

Terry Tomalin tragically passed away of a heart attack while taking a lifeguard class with his son at the North Shore Aquatic Complex in St Petersburg. But he left a legacy that continues in Florida.

In addition to serving as the Outdoors-Fitness Editor for the Tampa Bay Times, he was an outdoorsman, a journalist, an author and a Boy Scout leader.

In 2010 with less than three weeks notice together with Kurt Ott, Rory O’Connor, Dan O’Shea and Tomalin, over 100 people gathered at Gandy Beach to swim and support raising over US$30,000 for Navy SEALs. The swim has been formally named the Tampa Bay Frogman Swim with 100% of the proceeds going to the Navy SEAL Foundation.

Tomalin finds himself in great company as the only (known) swimmer with a craft beer named after him includes Petar Stoychev with La Stoychev, a micro-beer crafted and sold by Microbrasserie du Lac Saint-Jean in St-Gédéon, Québec, Canada.