From Canada To South Africa In Search Of Speed 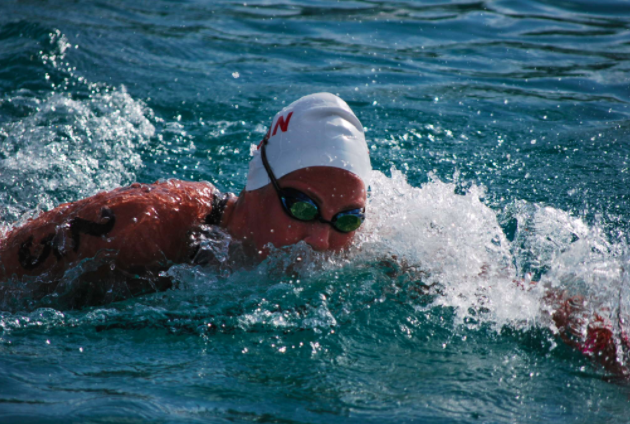 Olympic swimming coach Mark Perry has been taking open water swimmers to South Africa for decades – and has seen excellent outcomes as a result of racing at the aQuellé Midmar Mile in Pietermaritzburg, KwaZulu-Natal.

He and six emerging Canadian athletes are in South Africa for a 2-week Race Train Race Tour as part of Swimming Canada’s strategy to develop a culture of distance swimming in Canada.

The Canadian men finished 1 through 4 in the kickoff race yesterday while their teammates went 1-2 on the women’s side. Alexander Pratt of Calgary’s Cascade Swim Club led the pack for the men, while Marit Anderson of Calgary Patriots was the women’s winner. “The first lap was pretty easy but then it picked up a lot and I thought no, I can win. I liked it, it was fun,” Pratt said.

Perry smiled with humility, “They’ve been taught the same tactics, so it made for an exciting finish. They all did well, but still have plenty to learn. This first event gives us a good grasp before next week’s Midmar Mile.”

The Canadian sextet will continue training in Durban under the guidance of Perry and Cascade Head Coach Dave Johnson. The philosophy behind the Race Train Race format is to allow swimmers to race a short open water race, and be given personal race analysis instantly – including video feedback – before training to correct any mistakes and tactical errors made – an important learning process before the ultra-competitive Midmar Mile where American Ashley Twichell has been dominant over the last several years.

“It gives us the perfect environment to get a solid block of work in where the best of the next generation can go head-to-head every day and receive plenty of one-to-one attention. I’m excited to see how they race and how we get stronger each time we compete,” Perry said about the races on February 10th and 11th. “I’d like to see them on the podium, but the main aim of the trip is to keep learning, keep improving and prepare them for the challenges ahead.”

As part of Swimming Canada’s strategy to continue developing the open water program, various tours and events have been implemented to provide different experiences and growth to the next generation of distance swimmers. “It’s really exciting to see how we are now starting to develop a generation of distance athletes that see open water as an extension of their event base and something that they are keen to learn more about,” Perry said who helped steer Keri-Anne Payne to a silver medal in the 2008 Beijing Olympics. “The swimmers are getting an array of experience from pool events to exposure to different open water activities.”

“The world has significantly changed in open water even since the 2012 Olympic Games and we are seeing a shift in the athletes’ ability to swim fast at the end of 10 km, not just swim 10 km. This camp will be addressing current issues athletes and coaches need to address in training and in the race,” said Swimming Canada High Performance Director John Atkinson. “Experiences such as this for the athletes and their coaches are critical for the development of distance and open water swimming in Canada. Through the support of Own the Podium and NextGen funding this activity was possible and will contribute significantly to our athletes’ development.”

Information about the aQuellé Midmar Mile is here.