From Neoprene To Bioprene In The Extreme 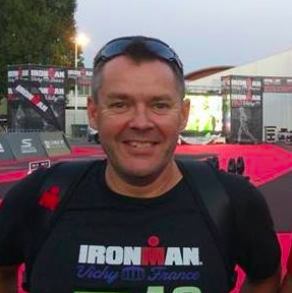 Ice Ironmen and Ice Ironwomen are the most rare of aquatic athletes – they can push themselves to the extreme in triathlons and ice swimming. In order to become an Ice Ironman or Ice Ironwoman, these athletes must complete both an Ice Mile and a full Ironman triathlon.

Andrew Ainge, a 47-year-old extreme athlete from Leeds, England, is the latest member of the club.

After completing a number of half and full Ironman triathlons, Ainge ditched his neoprene wraps and went full bore bioprene in the open water swimming world.

Starting in January last year, he began hard-core hardening training and completed Ice Kilometers and other cold water swims in water temperatures ranging from 1.5°C to 9.3°C up to 2.5 km. After ripping off a 19 minute 56.2 second Ice Kilometer at the International Ice Swimming Association Great Britain Championships in Doncaster, he was ready to take on an Ice Mile.

He returned to the 10 Mar 2018 Hatfield Outdoor Activity Centre in Doncaster and completed his first Ice Mile in 40 minute 15 seconds in 3.6°C water to become an Ice Ironman.

He describes his next evolution as an endurance and extreme athlete. “I seem to have become addicted to cold water swimming and am now training to swim the English Channel in 2019. I never would have guessed a year ago that I would be ice swimming. Totally bonkers.“