From Notes To A Typewriter And A Laptop: A History Of Marathon Swimming

“Grossman was a public information officer and was recognized as an Honor Administrator of the International Marathon Swimming Hall of Fame. He traveled around the world following the channel swimming and professional marathon swimming luminaries of the day,” said Steven Munatones. “In an era before the Internet, his passion and his talent for dramatically retelling their swims and lifestyles gave him a unique perspective. He knew and saw these swimmers first-hand which enabled him to single-handedly and comprehensively compiled nearly a thousand pages of notes, observations, recollections and data from solo swims and competitions in numerous bodies of water around the globe. Joe passed away in 1974, but Dale knew the treasure trove of information and history that was contained in those patiently typed page. Dale faithfully kept that content and eventually typed the information and then put on a thumb drive. But from 1974 to 2017, few people had the pleasure to read Joe’s prose and insights from his global tours on the World Professional Marathon Swimming Association circuit.”

Ned Denison, chairperson of the International Marathon Swimming Hall of Fame recalls how he got involved, “I was involved in the last stages of this book that started with Joe’s old notes which Dale inherited. Dale typed the notes into Microsoft Word over a 10+ year period. He shared a draft with me – there was a lot in there and a huge effort on Dale’s part. But Dale’s work was not fit to publish.”

A few more years continued to fly by.

Denison then got the book to the next stage. “Dale came to the Class of 2017 International Marathon Swimming Hall of Fame induction ceremonies in London that honored the Class of 2017 (see here). Dale has serious trouble walking at that point and had suffered a number of falls. He asked the Executive Committee for help and offered to pay anything just get it published.

I contacted Steve Walker who had recently self-published his own book. He volunteered and got the book published quite quickly. Dale was delighted and relieved; he so cared deeply about the sport and its history.”

“Dale worked with Steve to organize and edit these memorandums on carefully typed-out pages – written in the era before the laptop. Their work – based on Joe’s first-hand observations on shores and from escort boats around the world – captures slices of history that were previously only known to the athletes, race directors, and escort pilots of long-gone generations,” said Munatones.

“Joe had undisputedly cemented his legacy on the sport through his work with the World Professional Marathon Swimming Federation, but this book, A History of Marathon Swimming – has finally emerged 43 years after his death. It is an invaluable treasure because it lays out the actions and achievements of the athletes, describes the backgrounds and battles of famous competitions, and explains the historical trends that shaped the sport throughout the bulk of the 20th century.”

Denison describes the book. “If you love stories about the earlier days of open water swimming – you will love this book. The stars you have previous heard about come to life – warts and all. I have a fair few such books, but this is easily in my top three.” 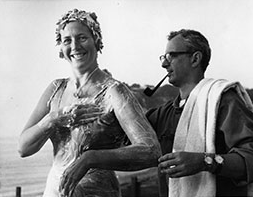 The book includes chapters on Matthew Webb, Gertrude Ederle, William Wrigley’s unprecedented Catalina Channel race in 1927, solo swims across the Strait of Juan de Fuca, Billy Butlin‘s English Channel races, the Canadian National Exhibition events, and many other events and accomplishments achieved by the fastest, toughest and most prolific swimmers at many of the sport’s most famous events and venues. His thorough research and first-person recollections could only be compiled by someone who was present and knowledgeable of the athletes and sport.

For more information and to purchase A History of Marathon Swimming on Amazon, visit here.

Joe Grossman is shown above applying channel grease to Greta Andersen before an English Channel crossing in the 1950’s.

A History of Marathon Swimming – published July 19th 2017 by Joe Grossman (Author), Steve Walker (Editor), Dale Petranech (Editor)
From Matthew Webb to Gertrude Ederle, from Wrigley’s Catalina to Juan de Fuca, from Billy Butlin’s English Channel races to the Canadian Expo, Joe Grossman has captured the history of marathon swimming. Joe’s incredible research and interviews provide us with a glimpse into the minds of swimmers who accomplished incredible things, before the advent of GPS or the Internet. The stories of sheer determination and first hand accounts of incredible swims are amazing to read–a book about heroes and athletes that you won’t be able to put down.