From Shore To Shore, Beautiful Moments In Monterey Bay 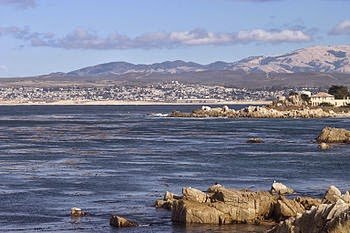 The crossing of Monterey Bay by a wetsuit-less, stinger suit-less swimmer has not been done since 1983 when the renowned Cindy Cleveland first pioneered the 25-mile course.

Similar its Northern California cousin, the Farallon Islands, the Monterey Bay was daunting and dangerous – and had defeated all bioprene swimmers for over 3 decades.

Besides being entirely cold and frequently venomous to the touch, the currents and tides of Monterey Bay were significant obstacles to overcome. But coach and fellow swimmer Joel Wilson helped crack the code on behalf of Patti Bauernfeind. The pair kept at it, trying and trying and trying again to cross the bay located south of San Francisco, California.

“I had help from jellyfish experts, weather gurus, a compilation of weather data, a Safe Sea scientist from Israel, and from Salesforce.com, a company that passionately believes in giving back to the community where I work.”

Three separate times since 2010, Bauernfeind failed to replicate Cleveland’s 1983 feat. But the fourth time was a charm as the northern Californian finally overcame all the obstacles to finish the swim between Santa Cruz and Monterey in 13 hours 0 minutes. With a 10-person support team, she drew inspiration from the beneficiaries of her crossing: children who benefit from the Trust in Education which promotes education and women’s development in Afghanistan and other countries.

She explains, “Over 150 million children in the world ages 5-14 are deprived of education due to poverty, slavery, sexual discrimination, racial discrimination, racism and religious intolerance. The cost of educating each child in the developing world is about US$1 per month per child. Several global studies show that educating a girl to at least 5th grade education level, is the most significant factor in impoverished societies to decrease infant mortality rates, decrease/stabilize population growth and significantly improve the basic life quality over a generation. The best way to fight poverty and extremism is to educate and empower women and girls.”

After finishing on San Carlos beach in front of the Monterey Bay Aquarium, the personable 47-year-old was ecstatic. “It’s hard to put into words,” Bauernfeind said to the Santa Cruz Sentinel. “You’re just kind of standing there going, ‘Wow, I’m here. I don’t have to work anymore.’ And, ‘Wow, it’s over.’ There’s a sense of relief and exhilaration.”

During her 28-mile course, there was a huge sense of relief when she coincidently ran into the first swarm of jellyfish. “It was like, ‘Holy Toledo, is this going to end this swim?’ It was pretty dense. Then there was a moment of, ‘I’m not getting stung,’ and ‘What is this?’” Instead of the species that had ended her previous swims, Bauernfeind hit friendlies. “Everything that was in their place was these really beautiful jellies that don’t sting. It went from this really dark moment to this really beautiful moment.

This was a total team effort which went beyond the swim community. I would love to get the word out so more people consider this swim. Joel [Wilson] helped to crack the code and the Monterey Bay is waiting for the next swimmers. Kim Rutherford is swimming across Monterey Bay on September 5th. Whose next?“