From South To North, Patty Hermann In The Open Water 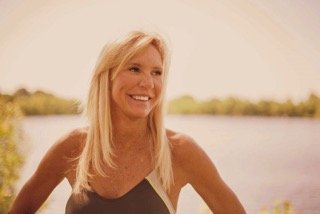 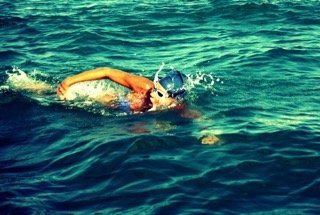 Patty Hermann has a distinct disadvantage when it comes to hanging the marathon swimming royalty in coolish or colder water where some of the tougher and more iconic marathon swims are held.

“When I have to tell people that I travel north to get to a swim event in Houston, you know I’m about as U.S; tropical as it gets sans the rum drinks. Water temperature is always a big factor in my races,” explains Hermann.

We asked the Southerner from Texas about her training and participation in events like the S.C.A.R. Swim Challenge.

Daily News of Open Water Swimming: Where do you train?
Patty Hermann: I train with the Houston Coogs Masters for pool swimming, but I also get a lot of open water mileage in on my own. I have the Gulf of Mexico in my backyard.

The Gulf affords me the opportunity to work out with the Galveston Beach Patrol any time I want. There is also a great training lake not too far away that I visit when the bull shark population gets too intimidating.


Daily News of Open Water Swimming: What is your background as a swimmer?
Patty Hermann: Swimming has been a lifelong thing for me. Competitively I swam my first meet at 5. As a kid growing up, my Dad would pay me 1/2 a penny a lap to keep swimming till I was exhausted and would go to bed without a fuss. I swam all through school and for the first two years of college at Louisiana State University before I took a break from the water and went on-deck coaching. I coached United States Swimming for a little over 10 years before I decided to give swimming a try again. I went back to my open water roots with the Galveston Beach Patrol and started competing for them in U.S. Life Saving Association competitions. The events I competed in were running, swimming, and rescue paddle. I wasn’t terribly good at anything other than the swimming, so the other 2 disciplines sort of got phased out. Eventually, it was only open water swimming. In all honesty, as I got older, it was harder and harder to compete on speed, so I started upping the distance which is where I am now.

Daily News of Open Water Swimming: What is the water temperature where you train?
Patty Hermann: This is where I get separated from the main pack in swimming. Seven months of the year my training temperatures are mid to high 80°Fs (near and above 30°C) in the pool; and high 80°Fs to low 90°Fs in the lake and Gulf. During the winter months, the training lake is closed, Beach Patrol is on hiatus – and you really don’t want to swim the Gulf alone – so workouts center around our masters swimming heated pool facility and they keep it around 78°F. There’s a small window in the spring and late fall where it will be below 75°F, but it is a short season. These temperatures may seem really uncomfortable to most, but there is a whole population of swimmers from the South that are strong at these temperatures and even seek them out. Unfortunately, that puts us at a disadvantage when we go north of the Mason-Dixon Line. But on the upside, it served me well at the Swim Around Key West where the water was 86.5°F with pockets of 90°F+. I’m like, “bring it on!”

Daily News of Open Water Swimming: What attracts you to the S.C.A.R. Swim Challenge?
Patty Hermann: I initially signed up for S.C.A.R. because I heard what a challenge it was and I knew from having recently swum at Lake Powell what a beautiful swim venue it would be. My ‘partner in crime’ for open water is the amazing Martin Strel and he knows the canyon waters like the back of his hand. So with him as my kayak assist, I ambitiously signed up to swim with the big dogs. When I realized that I was in the company of swimming royalty like Darren Miller, Sally Minty-Gravett, and Liz Fry, I definitely got nervous. But the hardest part was being odd man out. I knew that distance swims with water temps in the 60°Fs, I was going to need neoprene. I guess what I really take away from those concerns is that they were only mine; no one else cared about dress code. There was such a camaraderie amongst swimmers; an appreciation that everyone is coming from a different place with different strengths and weaknesses. There was nothing but support from the top to the bottom. Kent Nichols, the race director and organizer sets a vibe for this event that embraces the essence of open water swimming … simply a love of nature, the water, and a desire to challenge yourself.

Daily News of Open Water Swimming: What is difficult about S.C.A.R.?
Patty Hermann: By far, the most difficult thing about S.C.A.R. is the fact that it is a stage race. It’s not like other events where you give it your all and then you go into recovery mode for the next week. This is 4 days back-to-back and the lakes are surprisingly unforgiving … or Kent just likes watching us swim into the chop and wind. I struggle with the water temperatures when they are in the 60°F’s, but am taking baby steps to try and thicken my Galveston blood against the cold. The distances are no easy feat either. Any one day is doable, but back to back, it is a mental as well as physical challenge to bring your ‘A’ game to the shoreline each morning. I will always be the first to say that marathon swimming is a 2-man event; it is you and your kayaker, as a team, that make it to the finishing buoy line. With Martin paddling beside me, I know we’ll make the distance. Martin simply does not let you fail. If you’ve done the training and strength work, he has a “water zen” about him that keeps you going. If I turn to him and say “I’m sooo tired.” He will say, with a smile and thick Slovenian accent, “Yes, but we will keep swimming.” And that is simply the end of the discussion. He has taught me about nutrition which is an integral part of a successful stage swim … to keep in mind that I’m not only fueling for this swim, but must continue with vigilance for the next and the next days. A lot of times, when we get out of the water after a 10 mile day, curiously, we’re not that interested in food. He’s taught me that for and event like SCAR, that’s a slippery slope to avoid or I will gas out in the water.

Daily News of Open Water Swimming: How much do you train weekly/monthly in preparation for S.C.A.R.?
Patty Hermann: My training is two-fold, swimming and weights. I’ve been doing about 120 race miles a season for the last couple years, so from about March through October, I’m keeping a lot of swim mileage logged. As I lead up to events like S.C.A.R., I’m pretty consistent with about 35,000 meters between masters practices and on my own in open water. A couple weeks before, I’ll increase to up to 40,000 and then just kind of do enough to keep loose the week before. I don’t know if it’s the right formula or not, but it works for me. Right now I’m going through a mileage quandary because I just came off the Swim Around Key West so I would regularly be in “recovery” mode, but I have END WET scheduled within 2 weeks of Key West so for that race, I should be in “push” mode. Sometimes I sort of flounder like that, but I think if your distance base is strong, you can have blips in your swim training schedule and still come out OK. For weights, I work with a strength trainer three times a week. I think the weights are as critical to endurance swimming as the water time. Upper body strength is what allows a lot of us to stay in the water for 8+ hour swims without blowing out our shoulders.

Daily News of Open Water Swimming: What went well and according to your plan regarding your training?
Patty Hermann: My distance and strength training were spot on as far as I was concerned. Also, this year at S.C.A.R. I was determined to put my head in a different place, and give the cold temperatures a shot on the shorter races. I was pleased that for Saguaro and Canyon, I didn’t have to have an asterisk next to my name.

Daily News of Open Water Swimming: What did not go well or according to plan regarding your training?
Patty Hermann: I still constantly struggle with nutrition, both during and after a swim. I only feed and hydrate once every hour. I know this is not the best system, but more frequent stops starts a dialogue in my head that puts too much focus on time … ticking off 30 minutes at a time somehow seems to make everything go slower. I do this even though I know that the more frequent stops in the long run would pay off. I also have not figured out the crash that I experience about an hour or so after an 8+ hour swim, but I know it is related to my weak nutrition plan. I have learned from Martin to keep it all natural and that works for me. No goos and gels. Peanut butter and jelly sandwiches are my go-to solids.

Daily News of Open Water Swimming: What more or what else can you do or change for next year’s S.C.A.R.?
Patty Hermann: What I’d really like to do for next year’s S.C.A.R. event is learn how to kayak so I can give a little back. The community of open water swimmers that I have had the pleasure of meeting and the honor of swimming with is what makes it special. To me,it is a field of athletes that consistently show a strength of character that transcends the competitive nature of a lot sports. We pull for each other and know that failure is just an editorial judgement; if you’re in the water trying, you’re a winner.