Fun Night Of Fish Tacos On The Beach

Fun Night Of Fish Tacos On The Beach 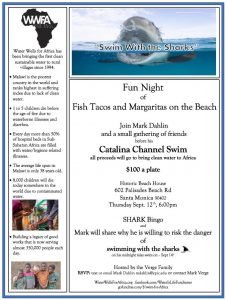 Pastor Kurt Dahlin has been establishing water wells in Africa for the past 3 decades, immediately and significantly improving the life expectancy of the local communities when they get access to clean water.

To listen to Dahlin’s story, mission, and recent interview with his former swim coach and radio host Terry Palma here.

For more information about the Water is Life for Africa campaign and September crossing, visit Dahlin’s GoFundMe page here.