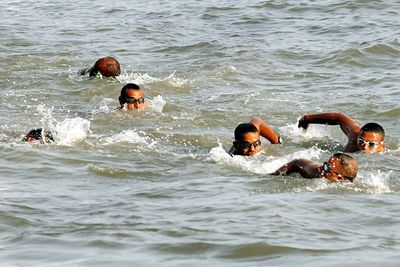 Swachh Bharat Abhiyan (or Clean India Mission in English) is a national campaign by the Government of India, to clean the streets, roads and infrastructure of India.

They will swim 2,800 km to Gangasagar and the expedition, called Ganga Avahan, should take 35 days where they will try to swim up to 12 hours per day.

The trio are well-prepared. Both Paramvir and Narhari were members of Delphinus, a 6-person relay team that swam 286 km (177.7 miles) around the city of Mumbai, India in an event called Swimmathon that 49 hours 44 minutes [see photo above].

“We plan to reach Shivpuri on the first night and Haridwar on the second and hope to cover 60 to 80 km each day,” explained Paramvir to The Hindu. They will try and swim for approximately 12 hours each day, or at least as long as there is daylight. 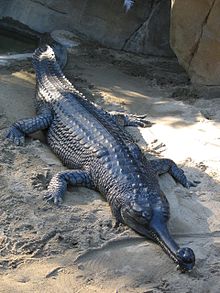 During the downstream stage swim, they will encounter rapids up to grade 5 (extremely long, obstructed, or very violent rapids that will expose the swimmers to significant risk.

Drops may contain large, unavoidable waves and holes or steep, congested chutes with complex, demanding routes. Rapids may continue for long distances between pools, demanding a high level of fitness). The swim will be dangerous and rescue may be difficult, even for their medical and support team that will be staffed with personnel from the Army, Navy and the Air Force.

The team will face a variety of obstacles including gharials (shown on left), snakes, quicksand, rocks, swift currents, and hyenas, but the men will also give talks at local towns and cities along their route to promote Swachh Bharat.