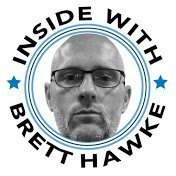 Brett Hawke interviewed Olympic medalist George Bovell who speaks profoundly and eloquently about the health and competitive mindset of athletes on the #111 episode of Inside with Brett Hawke.

Brett Hawke is a popular podcaster who delves into the minds of pool swimming’s highest achievers. He is two-time Australian Olympic swimmer and was a highly successful collegiate coach at Auburn University.

Bovell is a five-time Olympic swimmer from Trinidad & Tobago. The Caribbean region’s most successful international competitive swimmer won a bronze medal at the 2004 Athens Olympic Games in the 200m individual medley and had a lengthy career among the top swimmers of the world, qualifying for 10 FINA World Championship finals since his first appearance in 2001.

Bovell swam in lane 2 to a bronze medal in the 200m individual medley at the 2004 Athens Olympic Games.