George Freeth, The Man Who Could Walk On Water 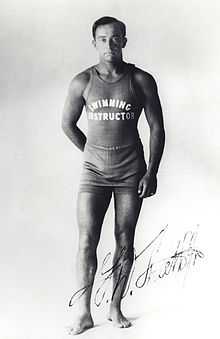 When you think of a great combination of roots for an open water swimmer, what could be better than a lineage from both Hawaii and Ireland?

The utter fearlessness, brute courage, and ability to handle all conditions of the Irish mixed in with the fluid grace, knowledge of ocean dynamics and the aloha spirit of the Hawaiians could not produce a better waterman.

Known as The Man Who Can Walk On Water, Freeth took the best of the DNA on his parents’ sides and became a surfer from Hawaii who later introduced surfing to the United States and organized the first lifesaving corps on California beaches.

For his avid promotion of swimming during the first and second decades of the 20th century, he was nominated as a Pioneer for induction in the International Swimming Hall of Fame. In addition to often being credited as being the Father of Modern Surfing, Freeth is credited by some with developing the rescue paddle board.

Whether onshore teaching the benefits of swimming, the techniques of life saving, or making heroic rescue of fishermen in storm conditions, Freeth was legendary and memories remain in a variety of forms. His life and contribution to surfing and lifeguarding is a significant part of the documentary film WaveRiders. His bust is currently located in Redondo Beach, California.

Tags: Father of Modern Surfing, George Freeth, lifesaving, paddle board, surfing, The Man Who Can Walk On Water, waterman, WaveRiders the Film