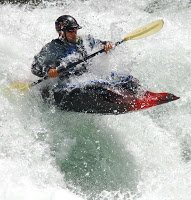 When George Williams Sr. saw a general Facebook request from his former age-group athlete Lexie Kelly that her Swedish friend who is attempting the Catalina Channel next week needed a kayaker, he responded.

Williams, who had previously coached Kelly in gymnastics in Redding, California, kept in touch with open water via Facebook. When the opportunity arose to help kayak across the Catalina Channel for Anna-Carin Nordin, he responded quickly.

“I got into kayaking because I love the water and spent a lot of time in it as a kid and used to swim a lot,” he explained about his connection between kayaking and swimming. “One day a buddy of mine wanted a mural painted on his truck. He was short on cash, but had 2 slalom race boats so we traded work for boat. Been bombing down all kinds of stuff since them.

Whitewater rafting became a way to keep the rest of the world in focus. Over the last 13 years, I have able to run some class 5 runs and dropped off a few waterfalls up to 25 feet as well as kayak surfing in the ocean
.”

Williams is excited to help Nordin on her way across the Catalina Channel and on towards the Oceans Seven. He is realistic and anxious about the adventure.

“I have gone out a few time at night on full moon paddles. I am looking forward to the adventure. Kayaking for me is my addiction. It is where the world comes together and all things feel right. So I look forward to giving this a try with Anna. And I will keep her safe.”

A swimmer could not ask for anything more.