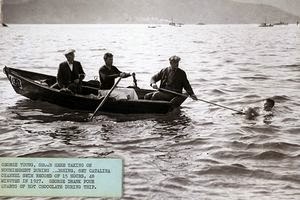 George Young was recently inducted in the International Swimming Hall of Fame as an Honor Open Water Swimmer.

Young burst upon the international scene when he won the January 15th 1927 Wrigley Ocean Marathon across the Catalina Channel, but he was a fast and accomplished swimmer throughout his teenage years.

As a 15-year-old member of the Toronto Swimming Club, Young had won consecutive victories in the 1923 and 1924 across-the-bay competitions.

A few years later as an 17-year-old, Young traveled to Southern California and competed in the Wrigley Ocean Marathon together with Bill Hastings, a friend, and was later met with another local friend Shier Mendelson who also hailed from Toronto. The 36-year-old Mendelson, who was a veteran open water swimmer, later became Young’s manager and mentor.

Information courtesy of the family of Shier Mendelson. Photo of George Young with his escort boat courtesy of Catalina Channel swimmer Chris Geer of Channel Twenty-one.