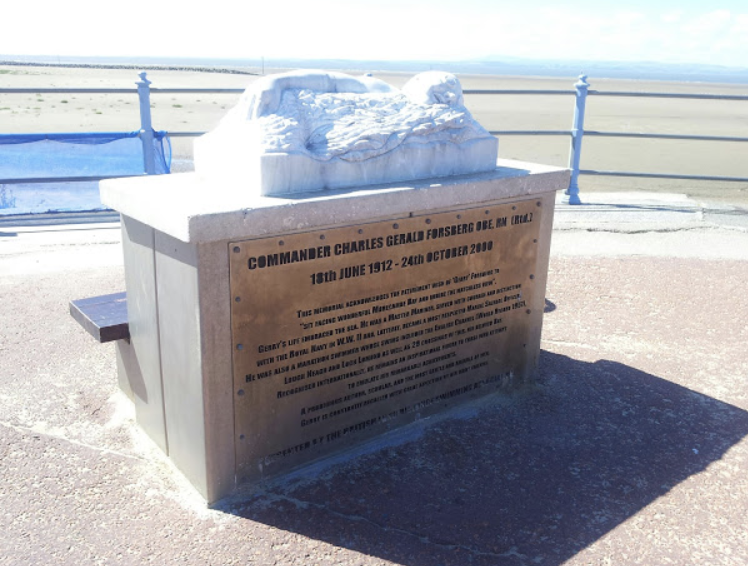 Ned Denison announced the late Commander Charles Gerald Forsberg OBE, RN (Rtd.) is the recipient of the 2021 Dale Petranech Award for Services to the International Marathon Swimming Hall of Fame.

Commander Forsberg was an individual with an unparalleled legacy.

He is an icon who was universally praised in his prime and beyond. As one example, the British Long Distance Swimming Association commissioned this memorial of Commander Forsberg. It reads:

Commander Charles Gerald Forsberg OBE, RN (Rtd.)
18th June 1912 – 24th October 2000
This memorial acknowledges the retirement wish of ‘Gerry’ Forsberg to “sit facing wonderful Morecambe Bay and imbibe the matchless view”. Gerry’s life embraced the sea. He was a master mariner, served with courage and distinction with the Royal Navy in W.W. II and, latterly, became a most respected Marine Salvage Officer. He was also a marathon swimmer whose swims included the English Channel (World Record 1957), Lough Neagh and Loch Lomond as well as 29 crossing of this, his beloved bay. Recognised internationally, he remains an inspirational figure to those who attempt to emulate his remarkable achievements. A prodigious author, scholar, and the most gentle and amiable of men, Gerry is constantly recalled with great affection by his many friends.
Presented by the British Long Distance Swimming Association. 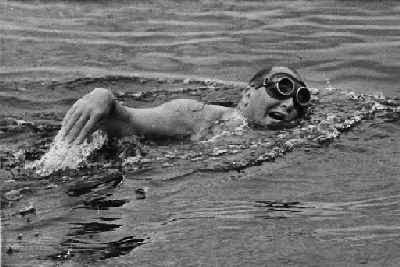 The contemporary open water swimming world may not fully appreciate the influence, accomplishments, numerous volume of publications, and vision of the late Commander as a marathon swimmer, president of the Channel Swimming Association, author of 3 books, and a columnist of 40 years promoting the Royal and Merchant Navy’s swimming, lifesaving interests, and long distance swimming.

The late Charlie Gravett from Jersey shared his thoughts of the Commander. “In 1954 a revolutionary aircraft, the first jet airliner in history, the British De Havilland Comet, had suffered three or four unexplained disasters. Losses in India and Europe with considerable loss of life threatened the aircrafts future, allowing the Boeing version, the 707, to eclipse and move ahead in aviation market circles.

Commander Forsberg, a maritime salvage expert in Britain’s Royal Navy, was tasked in retrieving a Comet from the floor of the Mediterranean off the Island of Elba. After nearly years searching, some 70-80% of the aircraft was brought to the surface. Wreckage was transferred to the Royal Aircraft Establishment at Farnborough in Hampshire. Painstakingly, the fuselage was pieced together on a skeleton frame and together with a complete Comet immersed in a water tank.

The investigation began in an attempt to search for the cause of the previous disasters. Pressure checks on the complete structure in the tank highlighted a fault in the fuselage design borne out by the salvaged structure. The design of fuselages square sectioned window apertures was seen to be a weak spot from which defects caused cracks to emanate from the windows corners, thereby opening up and causing explosive depressurisation and the structure breaking apart in flight at altitude.

Subsequent aircraft were designed with ’rounded changes of section at these vital points. For his painstaking search and recovery, Gerry was made an Officer of The British Empire (OBE).

Whenever I travel by aircraft, I offer up a prayer of thanks to Gerry and the Royal Air Force scientists who from his extreme efforts made flying a far safer mode of transport today. Therefore, flying to a swimming event and benefitting by his ‘tuition’ has made our sport safer and more enjoyable.

The fledgling British Long Distance Swimming Association of the 1960’s benefitted by Gerry making the maiden solo swim on all those great courses at sea and in lakes around Great Britain. We swimmers have much to be thankful to Gerry for not only our safety in the water, but also on every jet aircraft trip that we take.“

On a recent WOWSA Live episode, Ned Denison interviewed Charles Forsberg, the son of the Commander, Dr. Chris Stockdale, MBE, Kevin Murphy, and Roger Parsons about what they remembered about the Commander.

The legacy of Commander Forsberg and other inductees in the Class of 2021 will be honored sometime somewhere in 2021.