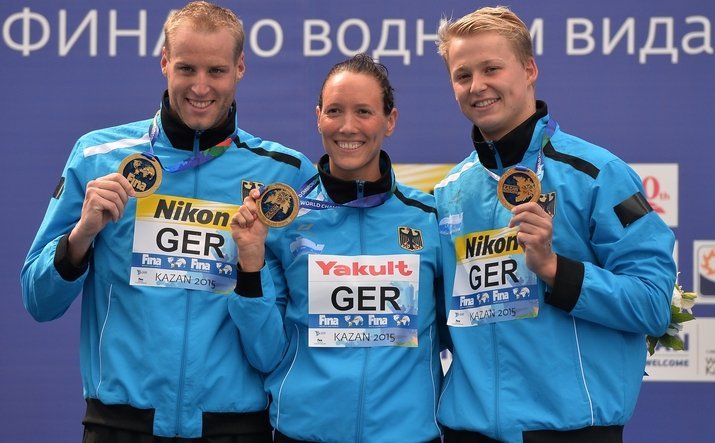 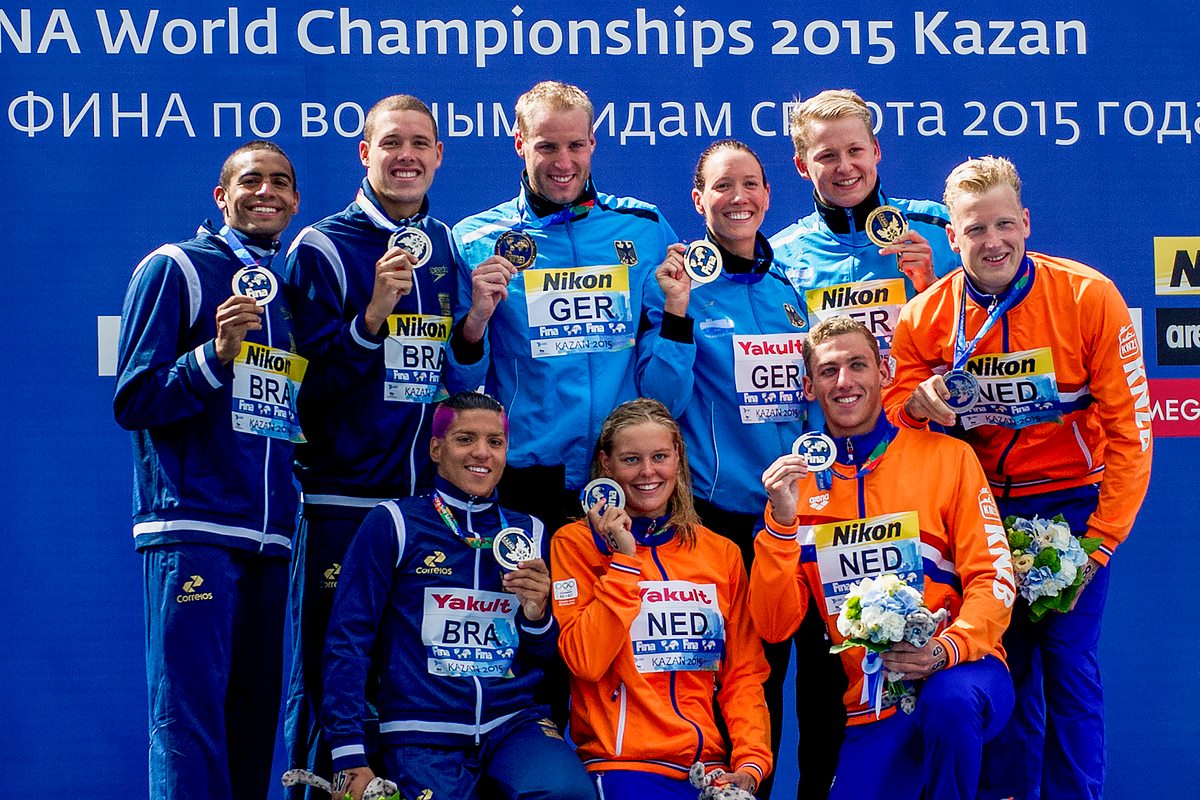 How fast was able to swim in collaboration with her teammates? Consider that Haley Anderson won the women’s 5 km race in 58:48.4, but Härle was able to swim 3 minutes 34 seconds faster in the team race over the same distance and course. Conversely, Muffels nearly won the men’s 5 km race finishing in 55:17.6, just a tad slower than his gold medal performance in the team event.

Although the conditions were different because of the wind and the packed conditions of the solo race, 3 minutes 34 seconds is quite a tribute to the effects of drafting – and to both Muffels and Reichert who both really stepped up and swam a strong solid 5 km.

The closeness of the race was remarkable considering that all the teams swam separately over the course and only had themselves to pace. Silver medal was literally shared among 6 swimmers when both the Netherlands and Brazil finished in 55:31.2. What was most remarkable in the race was that Allan Do Carmo, Ana Marcela Cunha, Ferry Weertman, and Sharon Van Rouwendaal all had exactly the same splits, a credit to their ability to swim very closely to one another.

The stars of the sport really shined all over the course in today’s race. Cunha won a medal in a fourth different event after previously capturing medals in the 5 km, 10 km, and 25 km races. She also joined van Rouwendaal, Weertman and Muffels in winning a second medal in the championships.

“The race was very intense, so I had to speed up, but Christian [Reichert]was taking charge of the course,” recalls Härle. “Our major rivals in the first half distance were the U.S. athletes, so we were focusing on them. What is the key to success? We are lucky to quite often win large races. Why? Everybody matters. Everybody makes a difference. Everybody is aware of his or her functions.”

While some observers say that the women have an easier responsibility in drafting than their male teammates who are pulling them along, they do not understand that drafting while racing at maximum speed for nearly an hour takes a tremendous amount of focus and stamina. Härle explained, “Can male open water swimmers be jealous of my result? It was quite a task. After the first lap, I even thought that I’d better stop. But I found whatever powers were along the course to keep on going. I’m grateful to my partners for encouraging me along the track. In fact, I am very scared of them. I think if I had given up, they would have drowned me.

The Netherlands Weertman explained his perspective of the race. “It’s been quite a hard race but I guess we’ve made it. It’s always difficult to compete in a team event because we have to consider our female teammate’s speed. Since our partner Sharon Van Rouwendaal is a rather strong athlete, everything went pretty well. How do we feel about not clinching gold? This time at the start we unfortunately wasted some time. The second lap turned out to be quite good for us that’s why now we clearly have to focus on the first lap.”

Cunha was typically happy and appreciative after her second medal in her second race at these championships. “We wouldn’t say it’s been an easy race but we are happy to take silver medal home. Is it going to help us at Rio 2016, at home Olympic Games? Undoubtedly. At these Championships we’ve already claimed bronze, now silver, it really brings us joy. Unfortunately, this very event is not presented at the Olympic Games program. There are only individual 10 km open water swimming events. That’s why we are surely to train not together but apart, individually.”