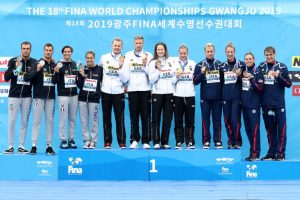 Germany won the closest mixed relay race in FINA history while it maintained its mastery of this event.

Germany, anchored by 2020 Olympian Rob Muffels, defeated Italy by 0.2 seconds and the United States by 0.3 seconds where 4 swimmers (2 women + 2 men) from country each swam 1.25 km.  Each team can determine what leg each swimmer swam.

Germany found itself more than 36 seconds behind the USA at the halfway point, but it grabbed the led with Soeren Meissner’s third leg brought his team into the lead after swimming the third leg. Muffels swam well enough to stay ahead of the Italy’s Gregorio Paltrineri and America’s Michael Brinegar.

Lea Boy of Germany said, “The race and the results were amazing.  I am speechless except say that I am happy, and that this was my most important race.”  Her teammate Sarah Koeher said, “It was my first race in open water swimming at the world championships. I enjoyed swimming this relay and I am looking forward to swimming in the pool.”

Meissner commented, “It was a really nice race and I can’t be more pleased with the race. It was a really good world championships for Germany and we hope this can continue for me in the 25 km tomorrow.”

Muffels spoke about racing against Paltrinieri, “All of us are really happy taking down the win today. I think each of us did a really good job, it was a perfect strategy. The conditions were quite good with some little waves, and they were not too big or challenging.

We started with our two girls swimming the first two legs and then our boys had to make their way to the front. Many years ago, I first saw Gregorio [Paltrinieri] swim when we were both at the Sette Colli meet in Rome. I was a junior athlete and I noticed that we were the same age, but he was so fast in his 1500m freestyle. After seeing him swim, I said to myself that I am going to be an open water swimmer and not try to chase him in the pool. Today he was chasing me in open water.

Gregorio Paltrinieri discussed the competition that he faced, “I felt good, it was a great experience for me. I am really happy with the silver medal. I really felt the waves and they were a new situation for me. Rob has great open water swimming experience and he was used to the waves and swimming close beside another swimmer.

I know he was trying to stay up with me and then he passed me just like that. I wanted to win, they made this medal possible. We love each other, it was fun today and they (teammates) are my family. I have a message for Rachele (Bruni), ‘We need you on this relay again in 2021. Promise you will be back on this relay and we both can help Italy win the gold.'”

Ashley Twichell talked about her lead-off leg, “I went off with a little bit of a lead, but I knew there were three guys – the Chinese, Germans and Italians – that were coming up on me. I just had to stay strong in the beginning, and when the Chinese guy came up with me, just tried to get into his pocket and felt like I did a really good job drafting off those three for as long as I could.

Overall, it’s really fun to do relays and represent Team USA. To be honest, distance swimmers don’t get to swim relays all that often. Relays are for sprinters, but we put together a really good result. I love this relay, it’s a sprint for us, so it was really fun watching Michael (Brinegar) bring it home so well.”