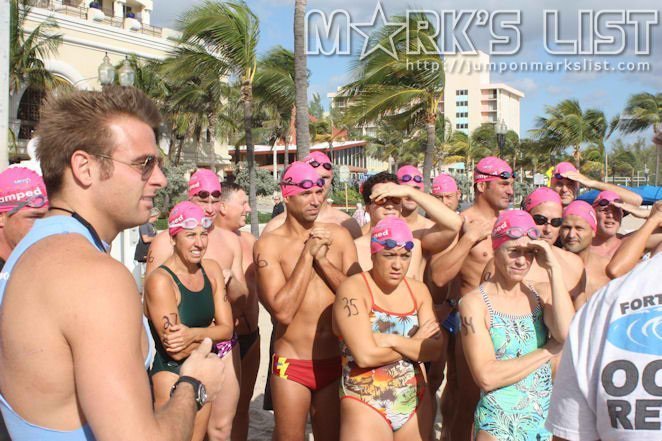 The event was held in Fort Lauderdale, Florida where 35 swimmers raised money for the cause bringing together athletes, advocates residents, visitors and local businesses including Chip Peterson, a 2005 world marathon swimming champion, who flew in from Southern California.

It was a warm, sunny day in Fort Lauderdale, water temperature was in the high 70’s, but the seas more than bumpy due to winds blustering at 25 knots. But with a longshore current at their backs, the participants reached the finish line and enjoyed a post race celebration together with lifeguards, spectators, and volunteers.

Michael Holtz (left), the 2011 Mr. Gay USA of MKH20, organizes a series events around the world raising awareness for the LGBT community visibility describes the event “I am really excited to build upon the successes we have had from the first year of the GET AMPED! athletic series in Texas and Florida.

The communities in Dallas and South Florida are really passionate.  We are very encouraged with the responses to these swims. The participants and sponsors of the swim jointed together with an after-party fundraiser benefiting the Nadadores Swim Club in Miami including give-aways of Nike, Speedo and Jet Blue airline tickets.”

Ricardo Valdivia won the GET AMPED! swim in just over 22 minutes.