Get Them Around Manhattan Island Fast 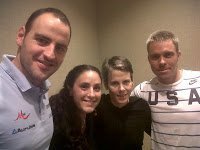 Tobey-Anne Saracino took up open water swimming in 2005 ten years after ending her pool swimming career as a six-time All-American at Springfield College.

But today, Tobey-Anne is literally and figuratively entering the big-time in the Manhattan Island Marathon Swim World Record Attempt.

The physical education teacher from Scarsdale, New York will not only take on the English Channel world record holder Petar Stoychev and American Olympian Mark Warkentin, but also Rondi Davies, a former Australian world-class swimmer and the long shadows of Shelley Taylor-Smith.

But the world of marathon swimming has a unique way to even things out and always makes comparisons difficult.

While Petar established a world record in relatively calm conditions, Tobey-Anne faced Force 4/5 conditions and persevered in an arduous effort that defied simple explanation. While Petar and Mark are swimming around Manhattan Island for the first time, Tobey-Anne is swimming it again after being the fastest American in the 2010 annual Manhattan Island Marathon Swim in June.

That experience and knowledge of the New York waterways will come in handy as they all navigate the 28.5 miles, part of which will be done at night.

Perhaps, most interesting, Tobey-Anne and her fellow female competitor Rondi Davies will start at a different time than Petar and Mark.

The different starting times will play to the strengths of each athlete. Just as Shelley Taylor-Smith started at 2 am on her world record swim, these athletes gain an advantage by selecting precisely the optimal tides to circumnavigate Manhattan Island as fast as possible.

While purposefully selecting the start times may seem unfair to non-open water swimmers, it is a well-known and well-used navigational and strategic tool used by escort pilots and marathon swimmers from the English Channel to the Cook Strait in New Zealand. Whether swimmers are starting at a time to take advantage of the tides in the Round Jersey Swim or starting at night to benefit from the calm waters of the Catalina Channel, marathon swimming is often just as much as a competition against the elements as it is against the time clock.

This is why wise marathon swimmers seek wise counsel, especially among escort pilots and navigators who constantly plot their course and time their departures to ‘get them across’ or ‘get them around’ as fast as possible.

Tomorrow, broadcast live on SwimNetwork, Tobey-Anne will be swimming around Manhattan Island with an estimated 2.7 knot ebb tide in her favor along the Harlem and Hudson Rivers for over half the race.

It is for certain her experienced crew will get her around as fast as possible.