Get Those Legs Pumping In The Open Water 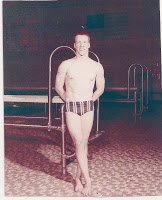 With the 25 men and 25 women qualifed in the Olympic Marathon Swimming 10 km, the importance of a kick was never so evident in the open water. Those that have a good kick were not only able to make surges and moves within the race, but also most importantly shift gears at the end.

Like an engine in overdrive, the 6-beat kick of fastest swimmers is a pleasure to observe. The lower-limb booster slightly lifts the body and propels it forward in synchronization with the faster arm tempo. Strong legs helps streamline and balance the body for enhanced efficiency and speed when it most counts. The greatest swimmers of the past, from Greta Anderson to Larisa Ilchenko, have the strongest legs in the sport.

To strengthen your legs, fins and kickboards can be used as well as simply kicking faster throughout your workouts. Fins can be short- or long-bladed, soft or firm, each with their own specific advantages. Whichever are used, the important goal is to get your heart rate elevated while kicking in workout. The workouts can be in a pool or the open water. The pool workouts can be short-rest interval sets or sprints. The open water workouts can be kick strong for a particular distance and then relax back to a 2-beat kick, repeated over and over again.

One of the fastest kickers in the world of open water swimming was high school student Mark Lambert of Hinsdale High School. While he chased Olympic gold medalists Mark Spitz and John Kinsella in races and workouts in the 1970s, he always had the ability to kick fast. Very, very fast.

A former member of a world record 800m relay at the age of 16 and the record holder of the 6-mile Sea of Gallilee Swim, Lambert was able to consistently break 1 minute in the 100-yard kick with a kickboard back in high school in the 1960s and 1970s. Even among contemporary world-class swimmers, his kicking speed is blazing fast.