Gethin Jones Urges Others Across The Bristol Channel 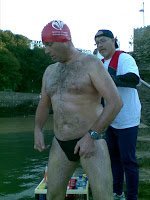 Kathleen Thomas was the first person to cross the Bristol Channel when she swam across the narrowest part of the channel – 8.5 miles from Penarth Pier in Cardiff, Wales to Weston-super-Mare, England in September 1927.

Gethin Jones went a bit further in his swim at a wider point in the channel – a much longer course from Ilfracombe in Devon, England to Caswell Bay in Swansea, Wales. Geth braved 23 nautical miles across a tremendously large tidal flow, starting at 6:45 pm in September 2009.

“Swimming through the night was one of the best experiences of my life. From watching the sunset to the star show after, I had the unique feeling that no one else had done this crossing before. However, after about 11 hour my shoulder went which made rotating my shoulder extremely painful. So with a combination of ibuprofen and trying different drills including one-arm swimming, finger dragging and doggy paddling, I finally approached the Welsh coastline. We had intended on coming into Swansea Bay, but with the changing of the tides, we aimed for Mumbles Head, then Langland Bay. When it looked as if I was going to touch a rock face, I decided to swim just that little bit further into Caswell Bay where I finished 21 hours and 29 minutes after my start.”

“I really want to promote the Bristol Channel as a worthwhile destination for channel swimmers.” For more information on this channel, contact Geth Jones.