Getting Dumped Into The Cold Up North From Down Under 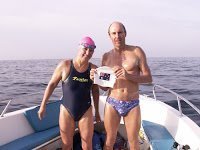 After training in Australia in one of the warmest winters on record, the Palfreys took to the Catalina Channel in the coldest ocean temperatures in recent and distant memories. Cold, rough, warm, calm, they accept what Mother Nature offers them.

Renowned Catalina Channel escort pilot John Pittman who was out on the water when his father escorted Lynne Cox back in the early 1970s said he has never seen a summer like this.

Chris, who earlier set the Molokai Channel record in 12:53 this year, made all the right moves. “We checked the water at Point Vicente for the currents, said waterman Forrest Nelson. “We discovered the currents were pretty nil, so went for a Palos Verdes start in 54°F (12°C) and aimed throughout the night for warmer water. Unfortunately, he cramped at the 90-minute mark. He chose a difficult week in a challenging summer. Chris and Penny never got to train in open water any colder than 75°F (24°C), so getting dumped into 12°C had to hurt.”