Getting Pumped While Swimming The English Channel 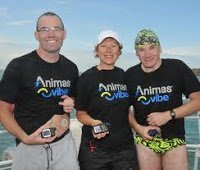 Claire Duncan, Mark Blewitt and Matt Cox, three swimmers who have lived with type 1 diabetes for more than ten years, were successful on their six-person relay across the English Channel in July 2011.

The trio helped raise funds for the Juvenile Diabetes Research Foundation while swimming with a waterproof insulin pump (Animas® Vibe) with a continuous glucose monitoring system.

Claire addressed the delegates at the 47th annual meeting of the European Association for the Study of Diabetes in Lisbon, Portugal to explain their exploits while Mark has repeatedly proven that endurance is entirely within the realm of a diabetic swimmer.

Besides the relay, he has twice done a two-way of Windermere and another swim across Loch Lomond breaststroke, as well as completed solo swims across the English Channel and the Strait of Gibraltar.

“Even though a diabetic has a much narrower window of performance, they can do what a non-diabetic can do if metabolically optimized,” comments Dr. Peter Attia. “They just require more supervision and attention to nutrition“.

As technology help showcase the exploits of swimmers like Claire, Mark and Matt.
br/> Copyright © 2011 by Open Water Source