A Gift Well Worth Giving 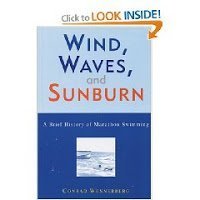 Conrad Wennerberg is the Chairman Emeritus of the International Marathon Swimming Hall of Fame and the widely respected author of Wind, Waves and Sunburn – A Brief History of Marathon Swimming, still considered to be one of the most authoritative books written on marathon swimming.

Besides extensively documenting the history of marathon swimming, Conrad played a key role in creating the International Marathon Swimming Hall of Fame.

With contributions tangible and intangible, Conrad played both a leading and supportive role in helping promote, document, establish and professionalize marathon swimming. His experience, insights and knowledge of the sport was developed first-hand as he swam over 12,874K (8,000 miles) while escorting and training with his athletes, including the well-known Ted Erickson and Dennis Matuch.

His book, first published in 1974, includes the colorful history of swims in the English Channel and the Strait of Juan de Fuca, with explanations of the mindset and physical obstacles overcome by some of the most accomplished marathon swimmers in history.

For someone getting into the sport or an athlete who is looking for inspiration, Wind, Waves and Sunburn – A Brief History of Marathon Swimming is a must-read book.

The 348-page paperback book is engaging, entertaining, factual and eye-opening with numerous black-and-white photographs. Conrad delves into the lives, the training and motivations of the greatest marathon swimmers up until the 1970’s. The exploits of larger-than-life heroes such as Abou-Heif, Judith De Nys, George Park, Greta Anderson, Cliff Lumsden and Marilyn Bell are detailed with insights that only an insider could know. Races such as the freezing 1964 Lake Ontario Swim, the English Channel swims of the 1950’s and the incredibly competitive 60-mile Lake Michigan professional races are brought to life with observations on the physiology and psychology possessed by the best marathon swimmers of previous eras.

A wonderful present for any endurance athlete or coach, aquatic or terrestrial.