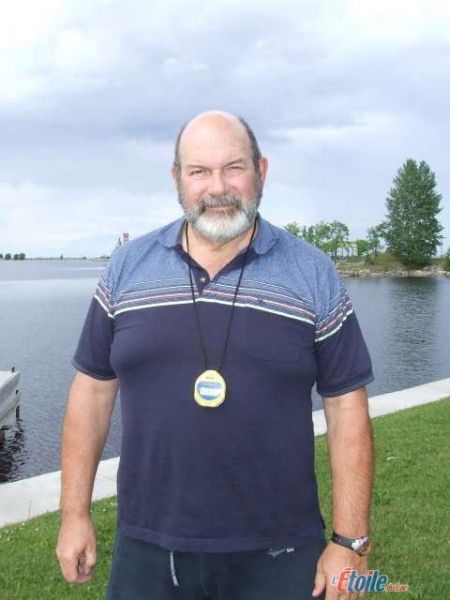 Gilles Potvin, now 71, has all kinds of recollections from years past.

The International Marathon Swimming Hall of Fame honouree competed in and completed seven 24 Heures La Tuque swims that required him to compete from around and around the perimeter in 2-person teams from 3 pm Saturday to 3 pm Sunday. The race was staged in an egg-shaped Lac Louis in Quebec, Canada.

Potvin shares the record with Rejean LaCourseire as the individual with the most 24-hour relays. “I remember one time helping John Kinsella who was swimming with Bill Heiss. They were 12 hours into the race and they are swimming fast, going for the record. Bill had a sore shoulder and a sore neck.

He was a little stunned, but then he said to me, ‘You really swam that 7 times? You are crazy
.'”

Little did Heiss really know the passion Potvin has for the sport. “I remember one year when my teammate got sick and just left two-thirds into the race. He just left the site, and our coach told me, ‘Go one more lap. He is sick to his stomach.’ So I did, but he wasn’t there. I did it again. And again. I kept swimming [without my teammate] for 7 hours and I was ready to go all the way if I had to. But when he came back, I was really glad. You know, late at night, in the dark, I had convinced myself that if I had to finish alone, I would. I was not quitting.”

And Potvin is still at it. “There was a paper mill nearby and it gave out fumes. It was so bad that the cars would have a thin white film on them in the morning. We were breathing that stuff. I got really sick during the races before they suspended operations during the swim. I had to put tubes up my nose after the race I was so sick.”

But he never gave up.

Even when he hit floating beer cans. “There were so many spectators around the lake watching the 24 Heures La Tuque. They would drink all night and some of their beer cans would be floating around the lake. We would hit them again and again: boom, boom, boom. But we kept on swimming even thought it was tough getting in and out of the water, racing for 24 hours, especially at night.”

And he is still at it, teaching and inspiring the next generation who will follow his legacy. “Open water swimming is a sport I adore. It’s one of the rare sports in which just finishing is an accomplishment.”