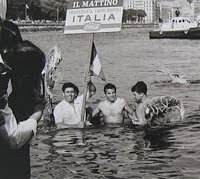 Giulio Travaglio, a native of Naples, Italy, sprinted onto the professional marathon swimming circuit and never stopped until he was inducted in the International Marathon Swimming Hall of Fame in 1966. Travaglio won the 32 km (20-mile) Maratona del Golfo – Capri Napoli in Italy in 1965, 1966, 1967 (see photo of finish above), 1968 and 1970.

His first victory in 1965 is remarkable because he entered the swim as an amateur, but beat all the professional marathon swimmers.

He won numerous other races in Italy including the Crossing of The Gulf of Salerno, the Double-Crossing of the Procida Channel, the Torre Annunziata open water swim, the Dead Sea (from Bacoli to Naples) Crossing, the S. Martino Oxbow Swim in Naples, and the Traversata dello Stretto.

Travaglio started his career as a pool swimmer where he won the national Italian 1500-meter championships in 1962 and he gradually transitioned to the open water. It was in the open water where he really thrived and eventually developed into one of the world’s best marathon swimmers. He now he lives in Rosario, Argentina, site of the famous Maratón Acuático Internacional Ciudad de Rosario.