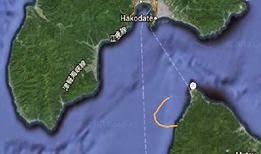 History has proven that the chances of success starting from the east in order to reach the northern island of Hokkaido are extraordinarily low.

In contrast, swimmers since David Yudovin and Steven Munatones in 1990 to the recent successes of Kimberley Chambers and Attila Mányoki have started on the western peninsula of Honshu.

With his 7 hour 29 minute crossing of the Tsugaru Channel last week, Mányoki continues to be a topic in the television news in his native Hungary. “Every day there was news about my days in Japan. On Saturday evening during the main news time, my swim across the Tsugaru Channel was reported and broadcast. It was also shown during the Sunday morning news shows too. And the TV stations are waiting for me [to return].”

The image above shows the typical course of swimmers who start from the eastern peninsula…before being pulled out.