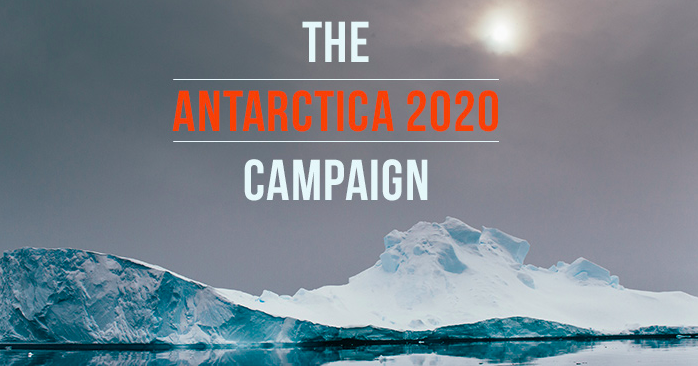 Lewis Pugh worked hard as a swimmer to prepare for his Five Swims in Antarctica for 1 Reason event.

But he worked even hard and had to be much more relentless in order to achieve his Speedo diplomacy goals in creating a new Marine Protected Area in the Ross Sea.

“In October 2016, we celebrated a momentous victory for our oceans and our planet with the creation of the Ross Sea Marine Protected Area in Antarctica,” wrote Pugh here about his upcoming Antarctica 2020 Campaign. “Protection of this last pristine ocean wilderness couldn’t have come at a more crucial time. As the world’s biggest protected area on land or sea, the formation of this Marine Protected Area sets an important precedent for future ocean protection.

But we have entered a new era of uncertainty. Many hard-fought conservation achievements are now under threat. We must not let our efforts in the Antarctic Oceans be undone
.”

Pugh’s worry is partly based on the very real disagreement that he and other scientists and environmentalists have with the stated positions of the new administration of American President-elect Donald Trump and Myron Ebell, the expected head of the U.S. government’s Environmental Protection Agency.

“It’s time for the next important step in Antarctic Ocean protection,” vows Pugh who will head off to Antarctica once again this next week.

“Over the next four years, we will be working to secure three additional MPAs in vulnerable areas of Antarctica…in East Antarctica, the Weddell Sea and the Antarctic Peninsula.” By 2020, Pugh envisions a creation of a nearly 7 million square kilometer protected area in Antarctica or roughly the size of Australia.

In order to garner world attention to issues close to his heart, Pugh will do additional ice swims over the next four years. “These swims allow me to show the world how precious these last Antarctic wilderness areas are.”

Unfortunately, time is not on his side, especially given the fundamental disagreement regarding climate change at the highest levels of the incoming American presidential administration and the environmental protectionism movement.

“The Ross Sea MPA was proposed in 1999…and took 17 years before it was finally made a reality. We don’t have another twenty years to protect the world’s last true wilderness areas. Protecting these oceans makes them more resilient to climate change, and enables them to help other oceans recover from overfishing and exploitation. We need these oceans. And for the first time in the history of the world, they now need us.”

Pugh is one of the nominees for the 2016 World Open Water Swimming Man of the Year among the following inspirational individuals: