Going In Backwards And Swimming In Reverse 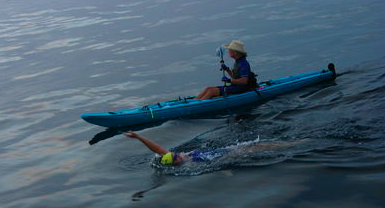 Going In Backwards And Swimming In Reverse

“When you look at Tina Neill, nothing in particular hints at records,” observed Steven Munatones. “When you talk with her, nothing she says about herself hints of greatness.”

But the humble explorer of the raw potential of the human spirit has been making waves in the open water for a long time.

In addition to unprecedented 28 hour 41 minute crossing of the 83.6 km San Clemente Channel off the California coast, Neill did a number of record-setting backstroke crossings in the England and Catalina Channels. In 2005, within 48 hours of her arrival in Dover, the then 39-year-old Neill completed her 33.5 km crossing using backstroke that was faster than the average English Channel freestyle crossing. Back home, the Governor of Minnesota declared the Tina Neill Day for her 13 hour 22 minute crossing where she walked in backwards and walked out of the Channel backwards.

Six years later, she swam backstroke in the opposite direction – from the California mainland to Catalina Island in 13 hours 27 minutes at the age of 48. Then two days later, she completed her sixth crossing from Catalina Island to the mainland in 10 hours 33 minutes swimming freestyle. She talks about her achievements:

Daily News of Open Water Swimming: How did you do such as fast turnaround on your swims, especially after your two-way crossing in 2008?

Tina Neill: I had completed Lake Zurich and Loch Lomond 6 days apart in 2006, I think. It was a fun trip to Europe. Not knowing at the time, but most likely this experience gave me confidence to complete two longer swims in a short period of time.

Daily News of Open Water Swimming: What did you do (or not do) to recover so quickly?

Tina Neill: I did some swimming, but little training. Recovery comes through going on with life and not focusing on a single event as more important than life. Although I put a full effort into an event, I never want to finish thinking I could not have completed another hour or more.

Daily News of Open Water Swimming: On your 2014 crossings, did you just stay over on Catalina Island, rest a day, and then decide to swim back freestyle?

Tina Neill: Well, on the middle day, Emily Evans, a friend, Catalina Channel swimmer, and part of my crew, and I ran the spring Catalina Marathon course in reverse direction. From Avalon to Isthmus. I had completed other long runs on Catalina Island and enjoy the scenery and bison.

I wanted to swim backstroke from the mainland to Catalina Island because I had swum it the other direction the first time. I was very disappointed in the Mainland-to-Catalina time. The crew on the boat had a great time playing in the water while we were running through the hills.

Daily News of Open Water Swimming: Were your crossings planned?

Tina Neill: They were all planned well in advance. I prepared for both swims as one single event. My swimming has evolved. I did not set out to swim the English Channel or any other long swim. It simply started while driving along a large Minnesota lake thinking that it could be fun swimming the length of that lake.

Daily News of Open Water Swimming: Were you a competitive backstroker as an age-group swimmer or college swimmer?

Daily News of Open Water Swimming: What made you want to do backstroke across the channel in the first place?

Tina Neill: When I finished the English Channel [swimming] freestyle, a friend asked if I would swim it a second time and I blurted out, ‘Yes I would swim it backstroke.” Not sure why I said that, but two years later I did. It continued to Catalina swims and beyond.

Daily News of Open Water Swimming: What specific problems or issues do you face in a backstroke crossing that are not apparent in freestyle? For example, does the escort boat have to be placed in a different position? Do you have kayakers aside you? What do you do during the feedings?

Tina Neill: Backstroke is enjoyable in the ocean. I enter the ocean back first and exit back first. During feedings, I keep my back toward the finish. The escort boat is alongside of me and there is typically a kayaker in the water, as there is for most swims. It is simple to sight off the escort boat. You do need to wear the glow sticks on your front side.“

Of all the strokes, backstroke is the most challenging – even more so than butterfly if judged by the number of successful channel crossings swum backstroke versus butterfly.

Backstrokers around the world range from American Natalie Coughlin to Spain’s Carlos Peña:

51-year-old Spanish ‘ultranadador’ Carlos Peña has completed 56 different backstroke open water swims around the world, totaling more than 5,000 km over his three-decade career. One 36-hour charity swim was across a dam in western Spain, the Gran Embalse de Alcántara in Cáceres, that he performed to benefit the Confederación Española de Asociaciones de Familiares de Personas con Alzheimer y otras Demencias (Spanish Confederation of Associations of Families of People with Alzheimer’s and other dementias).