Going Off With The Deep Enders 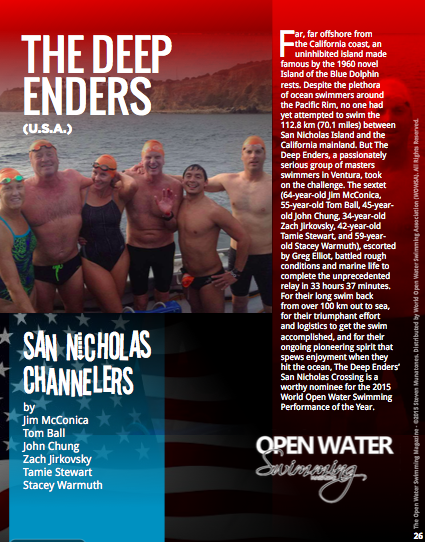 Video of The Deep Enders courtesy of Lynn Kubasek from San Nicolas to the California mainland.

Six Deep Enders swam from San Nicolas Island to the California mainland this October and was the first crossing from this isolated uninhabited island 112.8 km (70.1 miles) from the California coast.

Their efforts were nominated for the 2015 World Open Water Swimming Performance of the Year: Far, far offshore from the California coast, an uninhibited island made famous by the 1960 novel Island of the Blue Dolphin rests. Despite the plethora of ocean swimmers around the Pacific Rim, no one had yet attempted to swim the 112.8 km (70.1 miles) between San Nicholas Island and the California mainland. But The Deep Enders, a passionately serious group of masters swimmers in Ventura, took on the challenge. The sextet battled rough conditions and marine life to complete the unprecedented relay in 33 hours 37 minutes.

To vote for the 2015 World Open Water Swimming Performance of the Year, visit the WOWSA Awards here.