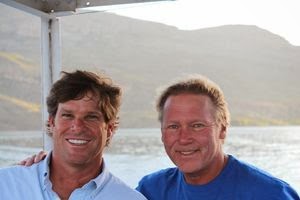 What started out as a means to train for his channel swims has ended up becoming a major event on the international marathon swimming scene.

Kent Nicholas, a mild-mannered attorney from Mesa, Arizona [on left], explains the genesis of the S.C.A.R. Swim Challenge, “I needed a place to train and train long for MIMS (Manhattan Island Marathon Swim).

To drive back and forth to San Diego [California] would be taxing. I got in touch with Arizona’s best swimmers and they joined me in a slew of lake swims in the American southwest desert
.”

Some Google Earth searches and a few long hikes to check out the situation among cacti and lizards, Nicholas settled on four reservoirs for his training: Saguaro Lake, Canyon Lake, Apache Lake and Roosevelt Lake.

His training and his Manhattan Island Marathon Swim went so well, he felt compelled to share his secret training locations with other like-minded working athletes.

“Saguaro Lake is lined with sage and saguaro cacti that alternate between open areas and tall canyon walls rising straight out of the water. The rugged beauty of this lake is breathtaking, and I was, at times, distracted, wanting to focus my attention on one feature or another. Canyon Lake lives up to its name. The walls rise up dramatically on both sides of the lake all along the twisty route from dam to dam where big-horn sheep live. The isolation of Apache and Roosevelt is much different than the cities of Arizona. We can look upwards and see a brilliant starry sky that we never get to see otherwise. It is gorgeous.”

With the 2012 circumnavigation around Manhattan Island checked off, Nicholas went about hosting the inaugural S.C.A.R. Swim Challenge. The underground four-stage swim took off. “S.C.A.R. is a testimony to Kent’s vision and efforts,” says David Barra. “He developed a real support system for everyone. It is a lot of work to get these stage swims organized. There are some long swims in remote places.”

Ultimately, the number of volunteers on escort boats, kayaks and onshore outnumbered the swimmers who came from all corners of the globe in the desert, one of the most unlikeliest places on earth for marathon swimming.

But Nicholas continues to develop the event year-by-year. “He is doing a great job and the swimmers are very well taken care of,” say Barra. 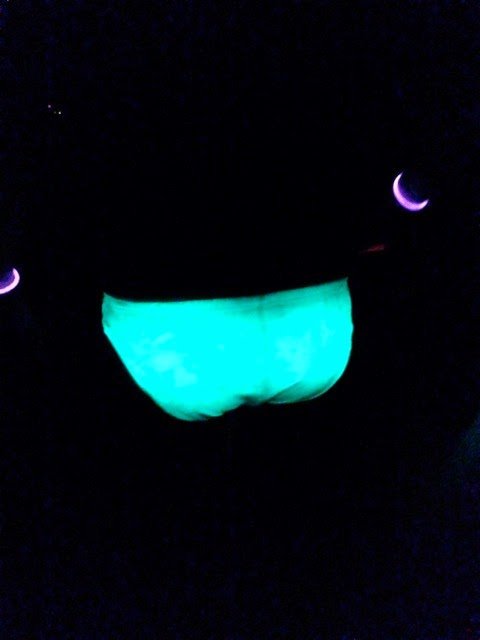 The culmination of the event is now a night swim where the sheer majesty of swimming in a remote desert location under pitch-black starry night skies with like-minded swimmers among glow sticked kayaks is overwhelming. Even Nicholas’ young son Luke got in the mix when he came up with a homemade, do-it-yourself glow-in-the-dark swimsuit.

The camaraderie among the swimmers and support teams is nearly indescribable for anyone not part of the night-time flotilla.

Four days, 66.9 km (41.7-mile) later, what started as an underground training swim is now an internationally recognized marathon event. From the 9.5-mile (15.2 km) crossing of Saguaro and the 9-mile (14.4 km) traverse of Canyon lake to the 17-mile (27.3 km) journey across Apache and the nocturnal 6.2-mile (10 km) swim in Roosevelt, Nicholas has created a unique legacy.

“In search of a unique open water swim challenge in Arizona, the four reservoirs on the Salt River provide that unique opportunity,” explains Nicholas. “It’s a bit of a rogue swim because there were no permits, licenses, insurance, coast guard support, law enforcement approval, or any other permission sought from anyone in the beginning. We hiked, boated, swam, laughed and swam again without letting the obstacles and hurdles of modern life prevent us from swimming more than 40 miles in a beautiful environment.”

Footnote 1: The popularity rises. “Within the first 36 hours [of the online registration], the event was sold out. Within 48 hours, I had a wait list of 27 very qualified open water swimmers. I’m seeing swimmers from new locations like Scotland, Japan, Iowa, Nebraska, Hawaii and Georgia taking an interest in SCAR. It’s going to be a great series of swims in 2015.”

Footnote 2: The Saguaro Lake stage is a 9.5-mile (15.2 km) swim at 1,529-feet (466m) elevation which is rimmed with canyon walls. The lake is home to all kinds of fish including carp weighing as much as 30 pounds. The venue is within the Superstition Wilderness of the Tonto National Forest. The Canyon Lake 9-mile (14.4 km) stage swim is done at 1,660 feet (505m) altitude, formed by the Mormon Flat Dam. The remote Apache Lake is a 17-mile (27.3 km) stage swim in a beautifully isolated reservoir that separates the Four Peaks Wilderness from the Superstition Wilderness. The picturesque canyon is framed by the Mazatzal Mountains and Superstition Mountains. The Roosevelt Lake stage is a 10 km night swim that begins at a very small boat dock approximately 5 miles east of the marina and finishes under the stars and moon at the Roosevelt Dam.

Footnote 3: The S.C.A.R. Swim Challenge was nominated for the 2014 World Open Water Swimming Offering of the Year. Its nomination reads, “The S.C.A.R. Swim Challenge set in the dry, rugged American southwest desert of Arizona is no longer under the radar. The secret is out about the out-of-the-way 4-day stage swim that focuses on camaraderie rather than competition, passion rather than pressure. Swimmers from around the world have discovered the joy of a 64.3 km series of swims in Saguaro Lake, Canyon Lake, Apache Lake and Roosevelt Lake where flexibility and recovery play important elements just as do feeds and navigation. Set along four majestic reservoirs on the Salt River in the desert wild, the brainchild of Kent Nicholas has become much more of an international happening than its initial beginnings as a rogue swim by locals. S.C.A.R. is a physical test and a psychological challenge made easier by the other participants. For its humble beginnings that have blossomed into a major marathon event, for its dedicated race director and all its helpful volunteers, for its unique course carved out of the desert wilds, the S.C.A.R. Swim Challenge is a worthy nominee for the 2014 World Open Water Swimming Offering of the Year.“