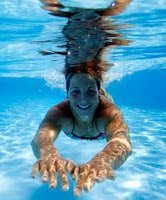 The Flannagan Cup Open Water Swim was first held in 1916 to raise money for a war veteran’s charity. The first hardy pioneers set out to swim 5.5K in the cold waters of the Tasman Sea – long before there were neoprene wetsuits.

The current race format has a handicapped start which, in theory, gives everyone a chance to win the race.

With such a handicapped start, weekend warriors still have the opportunity to win. With a switch to a multi-lap inner harbor swim and the inclusion of wetsuited swimmers has resulted in rising popularity.