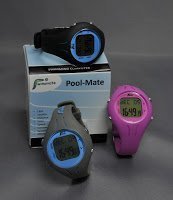 Pool-Mate is one of the most innovative and useful products to hit the swimming market in years. It is selling off the shelves – especially to those who prefer to focus on other things other than counting laps.

The watch does what it does because it contains accurate motion sensors and unique software algorithms that automatically recognizes each swim stroke and change of lap. The Pool-Mate displays and stores Lap Count, Time, Average Strokes per Lap, Speed, Distance, Calories and Efficiency data.Olympian Nick Gillingham gave a very positive review of the product (see below).

With over 10,000 watches sold in over 60 countries since it was first launched, CEO Lisa Irlam has been recognized for her vision and business acumen, being named Innovator of the Year in 2009 by Enterprising Women.

The only thing an open water swimmer could additionally want from this outstanding product is a water thermometer function – but since it was developed for pool swimmers, it certainly achieved its goals.