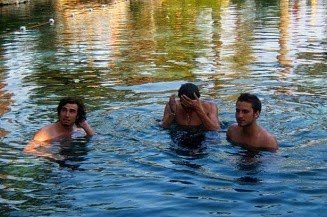 Kate Rew is always coming up with something new and innovative.

The OSS Adventure Swim has two swims arranged for this summer and is looking to create one or two additional wild swims for the summer of 2015. Places are limited and will be awarded by ballot on May 15th.

The first is the 10 km Teifi Castle to Castle Swim inn August on the River Teifi in Cardigan, Wales where articipants swim up and down with the tide during the weekend of the Cardigan River & Food Festival.

The second and third swims on the Series are the two-part Hudson Brothers on the River Eden: a 12.5 km swim on August 15th and a 11 km swim on August 16th together with Jack, Calum and Robbie Hudson. The three brothers plan to become the first people to swim the length of the River Eden in Cumbria and are inviting 5 OSS swimmers to join them on their penultimate and final days.

They will swim 90 miles in 9 days camping alongside the shore of the River Eden in their Swim the Eden Expedition. “We plan to swim from source to sea of our childhood river, The River Eden in Cumbria. We’ll be swimming 10 miles a day 9 days in a row, camping along the way.”

Swimmers can submit their adventure swim ideas to Morgan Gibson, the OSS Adventure Swim Coordinator of the Outdoor Swimming Society via [email protected] by April 17th.